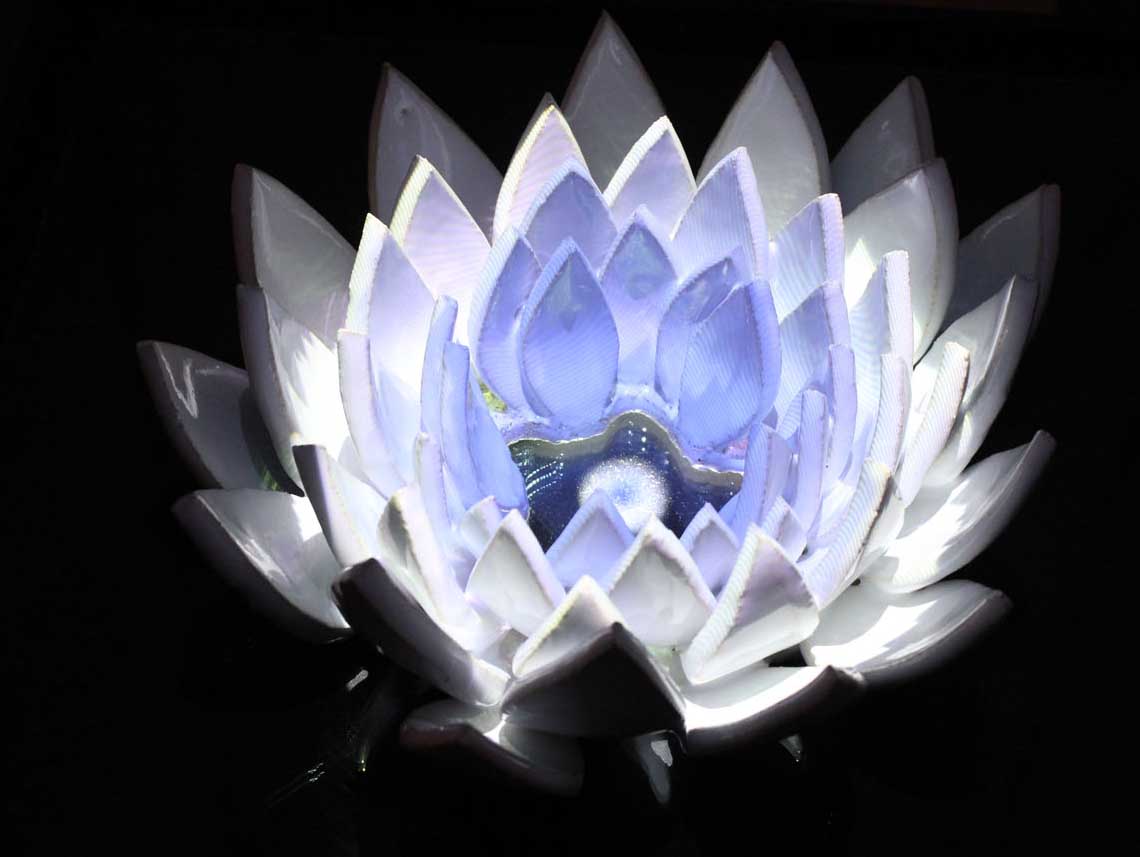 The Lotus ... but a still image cannot render the feel of this deeply generative work.

Verlinde : a flower in a generative spring

The happy few who surrounded Hugo Verlinde, yersterdy night in the basement of Galerie Chalot wont forget it. In this generative art spring, which blossoms here, in Art Paris and PAD and at Lelia Mordoch's gallery as well as in Laval Virtual, a flower was borne.

Around the Lotus, shown for the first time, were taking part Pierre Hénon, president of Paris ACM Siggraph, Judith Guez, president of Les Algoristes, Christa Sommerer, the austrian generative artist, in visit from Vienna, and of course Valerie Hasson-Benillouche, the gallerist.

This work marks a new milestone in the search of Spirit and Matter mating that Verlinde started in the 80's on his graphic pocket calculator. Here, the PC power generates in real time an indefinitely changing move of blue and white patterns, projected on a ceramic white and partly translucid sculpture, specially designed along with the program. We let you the pleasure of discovering the technical mounting in the Gallery (and other shows in the future).

The artistic discourse also has reached new heights, in part due to the seminar he leads at IEP (Institut d'Etutdes Politiques, "Sciences Po" in short) about digital art in the public space. Two points are now well sharpened : the reverence of the generative artist for the life he/she is creating, and the complementarity of generative art and cinema.

Verlinde makes repeated reference to Antoine Schmitt and his major motto that a work is achieved when the programmer thinks he would kill its life if he interferred again in its code. As well as Schmitt (and, think we, earlier than him), Verlinde has projected his images on material stuff. Technically, this gives density and substance to the otherwise rather dry pixels (Schmitt) or transcendental curves (Verlinde). Philosophically, it unites matter and spirit. Verlinde heralds a radically platonic vision of mahematical structures as perennial entities, bringing form to matter and then stirring its life. The Lotus expresss strongly this view. And, with the choice of a flower so long linked to Buddhist philosophy, it touches into the universal unity that is common to the mystics of Orient and Occident.

But, may we add, life is always dirty somewhere. This also is shown by the Lotus. Don't stick your eye on the center of the flower. Here, as the mud whence the symbols-loaded flower blossoms, stays a small untidy spot. Somehow like in Courbet's Origin of the world. Through this dark hole springs the seminal beams that give light to the ceramic petals and their flush black environment.

Verlinde's trips from the cinema to generative art show another facet of his platonic philosophy. He started with cinema, inspired by the slow generation of curves in his initial calculator. Like all anmation artists of the 80's and 90's, he had to spend hours of computation for each minute of film. And, anyway, he was dissatisfied by the worldly evanescence of an eternal idea translated into film. Then the computer specialist of the Cube (Isssy-les-Moulineaux) opened for him the road to real time, and from there to generative art. Here, ideas are freed from time structures and can express their autonomous life and interact with the world and with the audience (on this point, as noted Pierre Hénon, Verlinde has not yet gone very far). A reverse trip to film remains attractive, but now only as one among many lines of creation.

From the happy few to wider audiences

The present form of the work is too small and fragile for large public spaces. But, as with his precedent works, Verlinde took care of considering it the first in a series. Some of his precedent ones have taken off from intimate wall things to to full building fronts. After the spring flowers, let's wait the summer fruits, by Verlinde as by all the generative art community, well alive in Paris as nowhere else.