From Viola to Perconte. 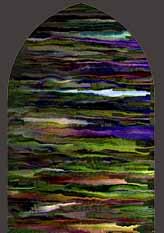 The Collège des Bernardins, in Paris, with its high gothic vaults animated by catholic communication media, never fails to take you in pious feelings. Jacques Perconte's Mistral video takes off powerfully in such an ambient, projection mapped on the whole heigth (some 6 meters or more) and width of a wall in the sacristy.

Slow motion, semi-realistic huge images and meditative music (low synthetic drums and lapping of waterflows) remind us immediately The Crossing, by Bill Viola, shown in Paris this Spring. And the public has the same behavior: crossed legs sitting on the floor, and a meditative pose that stays up to 30 minutes, a very long time for any work of art (oher than cinema or live performance where you are stuck onto your seat until the end).

But nearly 20 years stand and the digitalization of video stand between the two works. Viola was a gifted craftsman in analog processing. Perconte makes a specific use of digital techniques, mainly harnessing the glitch effects of compression/decompression algorithms into a spectacularly impressionistic touch.

This version of the work stays within a comparatively static frame, with a somehow cyclic use of the effects. Cuts follow cuts, each developing during some two minutes then letting place the another one. Each cut tends to stard wit a semi-realistic view, progressively dissolving into abstract patterns. Since Perconte has in store some five hours of rough original filming, and can activate many kinds of transformations, the play could last indefinetly without ever looping on itself.

In contemplative mood spectators could stay there for hours. More actively geared spectators will after a moment wonder if the play has a definite timeline, and search for some kind of scenario to sustain their interest. That not what Perconte has chosen this time.

He could very well add this dimension to new versions of the work, along two tracks that he has explored in other works:
- organise the views into a scenario with a beginning, an end, and a travel between them, as in Après le feu (2012, see our post (sorry,in French)),
- play it in live coding performance, as he did in Galerie Charlot last year (our post).

That lets open wide avenues to the creativity of this special, and as far as we know unique in the world, artist. But don't wait for new developements: go and sit in Bernardins sacristy, and enjoy!