Marcigny, a small town of Burgundy hosts a non-profit ambitious art center, and Art Elysées offered them a good space in the Parisien scene. Art still resists to commercial and VIP domination.

The good news come from Art Elysées, the bad ones from Fiac and IYA with Slick-Attitudesin the between. Show-off/Variation, with limited budgets, and a smaller floor space, explores new orientations (biological, tablets). Contrasting with the overtly "VIP" centered and no-nonsesed Fiac, Art Elysées and Variation let space to non-profit motivations and creativity. Technically, prints tend to replace the full generative/interactive works.

See our general presentaition of the French digital art stage on this 2014 Fall. And to feel the evolution over precedent years, see our last synthetic post for 2013, and our post for 2012.

We focus here on a factual presentation of the shows, artists and works, and will try deeper wider and more critital comments later.

Alain Le Boucher on Lélia Mordoch stand was quite alone last year to represnet digital art. Miguel Chevalier is now present also on this gallery, presenting Meta-Cities (2012) and Body Voxel (2014). And they think about some collaborative word. Good news for everybody.

Quite astonishing in such a commecial environment, a large space was devoted to a non profit provincial institution, the Frank Popper Contemporary Art Center (Centre d'art contemporain Frank Popper), with facilities in the small Burgundy town of Marcigny. The stand presented many works from the Center collections.

Kinetic and not digital, but near to generative art, the rotating works of Manuel Merida (on Meyer-Zafra space).

On the other hand, we saw no digital nor kinetic arts in Design Elysées, where some funny works were presented last year.

That's the really bad news. Galerie Denise René is missing. The only one stand showing digital works is MFC-Michèle Didier, with artists books. We are here on the borders of digital art, but this resistance of a medium threatened by Internet is worth to be noted, and so more so as several artists. Two of them are digital enough to be present in diccan arpresented: Clause Closky and Alan McCollum. The orhter ones, Robert Garry, Yona Friedman, On Kawara, Chrristian Marclay, Allen Ruppersberg and Untel being more like object designers or typewriter artists.

Nicolaiev: Cry me a river. Art as a gold case for money...

Still on the borders of digital, note also Gupta Shilpa and his work 00.01 Flapboard.

Not at all digital, but talking about digits, and with humour : Stefan Nikolaiev, Cry me a river (2009) Michel Rein Gallery.

Galerie Charlot is nearly the only one gallery to show digital art, but with a large stand and several artists: Sommer&Mignonneau... We have been seduced by the last works of Perconte, with new pastel palettes for his Ardèche prints from the generative work Nuages en Ardèche. This gallery has played a pioneering role in pushing their artists to offer prints rather than full scale computer works. With some success, and quite high prices.

Nothing digital this year, in spite of a wider and better located space (Carreau des Halles).

Variation at Blancs-Manteaux. A challenging volume, cleverly used. On the foreground, live show by Orlan.

The space at Blancs-Manteaux was smaller than in 2013 at Espace Cardin, but with an impressive architecture, a challenging volume brillantly landscaped.

The team of curators (Vanessa Quang, Anne-Cécile Worms and Dominique Moulon) have done a great job to break new ground and give place to new artists as well as to (really) new media:

- The work are mostly new or recent, by experienced and famed artists as well as by newcomers and even students.
- Tablets and smartphone grow in importance, as attested by the Orlan's presentation at the entrance.
- Kinetics are of less importance than last year, but on the other hand...
- ... many prints (on paper or other matters) are hung, be they works directly done for this medium, or shots from videos or generative works (we shall comment later on this point. Notably : France Cadet, Ikam & Fieri, Anne-Sarah Le Meur, Jacques Perconte.

The artists and their works at Variation

Orlan,the prime star of Variation 2014. She combines bio-art (many implants in her body) and web art, with this year tablet application with augmented reality. We take this image from France Culture website. Her live show at variation was very difficult to capture.

Stéphan Barron
> Daedalean Labyrinth (2014). This cubic labyrinth is formed by stacking 25 QR codes tracing the path of Leopold Bloom, hero of James Joyce's Ulysses through the streets of Dublin. This art project is related to Stéphan Barron's Earth Art and Technoromanticism. It is also following his QR artworks specially White QR on white.

Cecile Beau et Nicolas Montgermon.
> Cosmogonie (2012) Installation. ... a heap of ashes, with a moving center, quite like an extinct fire or vulcano.

François Brument et Sonia Laugier
> Eclipse (2014). Installation. A central plate is surrounded by reliefs lighted by 120 LED's, controlled by the hand upon the central plat.

France Cadet. Robot my love. Cadet is one of the few artists to offer a positive view of human-robot coevolution. (Photo Alain Longuet).

Elisabeth Caravella.
> How To (2014) . A mock tutorial about 3D software, a very original work of art. Pperhaps a little too long, but one of the most original works of this show.

Caroline Delieutraz.
> Only God can Judge me (2014). She has created a font with tattooed letters gathered on the web. They you caln use it to write what uou like on her website (operational ?).

Ait Al Kaci showing (somehow) the making-of for his round the world pictures with sketchbook. No technical sophiscication, but the idea pleases.

Norbert Hillaire: The meaning must get our of the contrast. (Quite conceptual art, we think). Photo Alain Longuet. 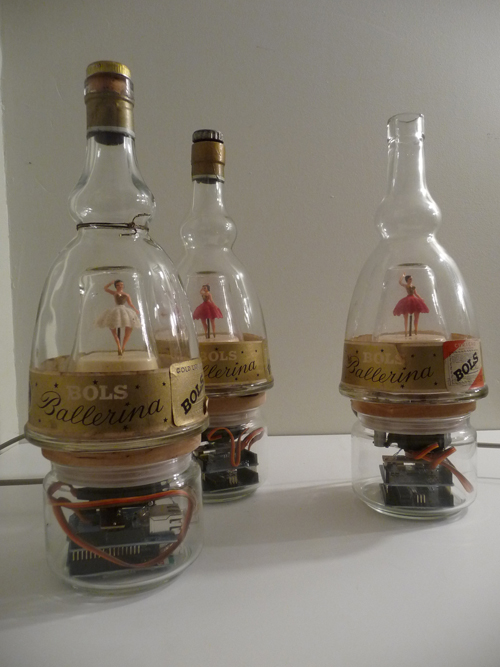 Matt Pyke, The walking city. In spite of its very light keys, this work had the largest attentive public in Variation.

Scenocosme.
> Echos (2011). A section of a tree trunk, carved and used to generate music. Nature and machine hybridation. .