From kinetic to digital

No doubt : in the digital art spring of Paris and Brussels, the Denise René Gallery takes a leading part. And it is all the more important since this Gallery played a major part in the Parisian opening to contemporary art, some 60 years ago, specially with its engagement for kinetic art. With a small miracle : Agam, an early star in cinetic art (see his still working fountain in Esplanade de la Défense), signs here some digital works on large screens.

Two years ago, this gallery seemed quite sleepishly showing its traditional group of artists. Then they made a first opening with digital screens by Santiago Torres. A little later, boldly, they let Hugo Verlinde project his transcendant curves upon a moving sculpture by Nicolas Schoeffer, with a duo of texts by Hugo and Mrs Schoeffer (our note) . Not a technical success, the projected image on a curtain being too fuzzy. But emotion, certainly.

This time, they played digital right down. Tradition is not forgotten, with screen works signed Agam. But brand new bold works by Crespin and LAb[AU] but also Pe Lang, Cruz-Diez and Zimoun. A global show comparable to Turbulences II in Brussels. Playing the same game for their definition as the Algorists, the show is titled :
">
# passion art (cinetique - numerique) ;
if (art) then (cinetique)
art-cinetique-numerique@deniserene.com

All the works are somehow both cinetic and digital. But they let themselves sort into two categories : moving sculptures, animations on screens. Both break new grounds... and raise new issues.

Mosaic, global view (a work difficutt to be photographed, due to the triple projector lighting)..

Let's stard with simplicity, apparent at last (because, with computers and software on the behind, you are never sure no to miss something, so more so if you are in a hurry). Elias Crespin works welcome us at the entrance. Bianco y Rojo (2013) mobes its large circles, slowly. More surprising, and of little interest on first sight. But take your time and enjoy.

A lot more materially sophisticated, Tapiz Doble (2013) continues the Tapiz series. This time with two layers of suspended strings of metal, arranged in groups of four, with a series of mobile squares (see our photo, we have exaggerated the contrast to make the strings visible ; this kind of work is quite a challenge for photographers or film makers). With 12 squares, that demands the command of 48 iindependent motors. Hence they can program not only the position but also the slope of each square but its possible torsion.

Series of small motors are also used by Pe Lang, who shows variations around his basic device, Moving Objects : rings moving along strings rotated by motors. In the version shown in Brussels, the motors were visible. In the two versions shown at Denise René's, one hides the version inside the frame (Moving ojbects n° 810-877). Another one uses and shows a unique motor, on the left of the frame, moving a vertical which commands the tension of twisted strings. .

Zimoun's 121 prepared dc-motors. It's not easy to get the meaning of their moves or the specific harmony of the graphic patterns suggested.

A step higher in complexity is reached with LAb[au] Mozaique, variation 01 (2012). A large square (160x160 cm) is divided in a matrix of 8x8 white squares. Each of them may be pushed forward by a linear motor, with a rather slow movement between the base plan and the advanced position. The moves are computer controlled, according to the Conway's Game of Life rules. The whole is lit by a set of 3 monochrome projectors, giving complementary color shadows. The spectator, then, to say so, sees a surface modulated in depth and color according to a chessboard matrix. He is surprised and called to contemplate the for some time, in order to get the beauty of it. It is not easy to enter in the play, and the motors are a little noisy. And finally, we remain with the impression of an ambitious project, but quite difficult to engage with. . Finally, let's consider this "variation 01" as a prototype ( a beta version, would say computer developers).

The same group takes another way with Particle Springs (2011) You see at first a set of four screens, displaying delicate lines, like flowing silk cloth. the moving images on the screens (1920 pixels wide) are nevertheless carefully carved. Their thin, silky lines, are smoothed by elaborated anti-aliasing algorithms, of which even the imperfections may be interpreted as a sort of grain. But the actual originality stands behind : the sculptural construction of its four computer boards, completed with their power supplies. Even the cables bringing power of different voltages and signals are graphically curved. The whole is encased in thick plexiglass. It's probably on purpose that you cannot see the images and the processors at the same time.

All these works demand admiration for the ideas, the complexity of design, the purity of material implementation. 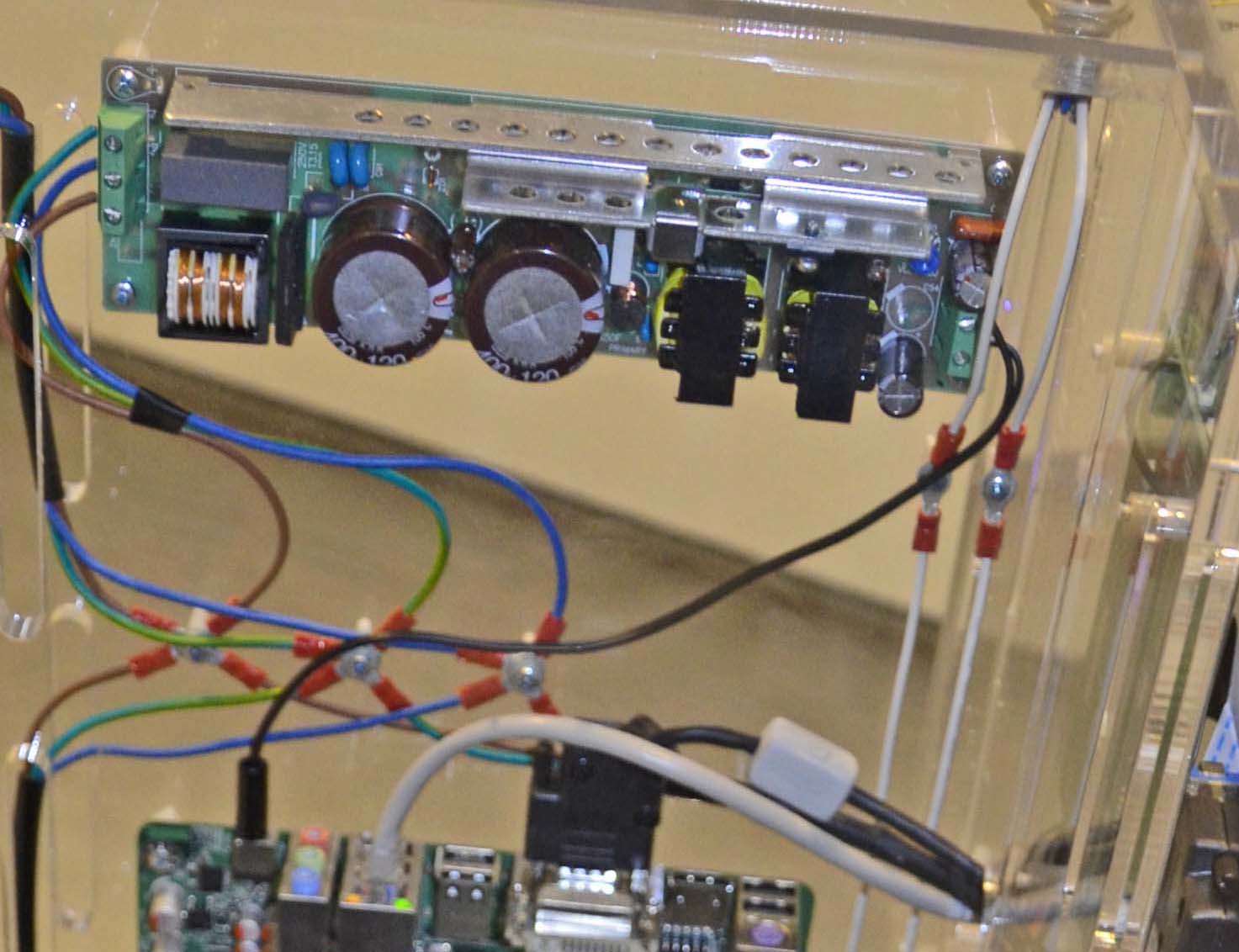 Particles. General view, from the processors side, and close up on top, to show a power feed and a processor wiring. That'a rather unique feat : generally, even with artists who consider important to show everything (like Alain Le Boucheer), the feeder is left out, hidden in the plinth or let discretely at the base of a wall.

They call to further thinking about what to hide and what to display. We shall elaborate on this point in another note. They have two drawbacks : the humming of motors, so light be it, could be disturbing in a private space.

But we are more worried by the durability of such constructions. They combine the frailty of mechanics with the obsolescence of processors and software. The lovely flying butterflies of Philippe Debouclans, with just a motor and an photovoltaic cell, which you can buy for 38 euros on Internet or some toy shops, have good hopes to live longer than the ambitious devices of digital art at its present top.

And, confirming our impressions at the Dynamo and Le Parc expositions (see our note) , the generous calls of the 60's to spectator participation are no longer trendy. Not with good reasons, we have to say, and so more so with the delicate structures and mechanismes shown here. See our note about interaction.

More interactive, no doubt, are the works presented on touch screens. Not the small lap tablets, but large ones (58x99 generally) hung exactly like canvasses. 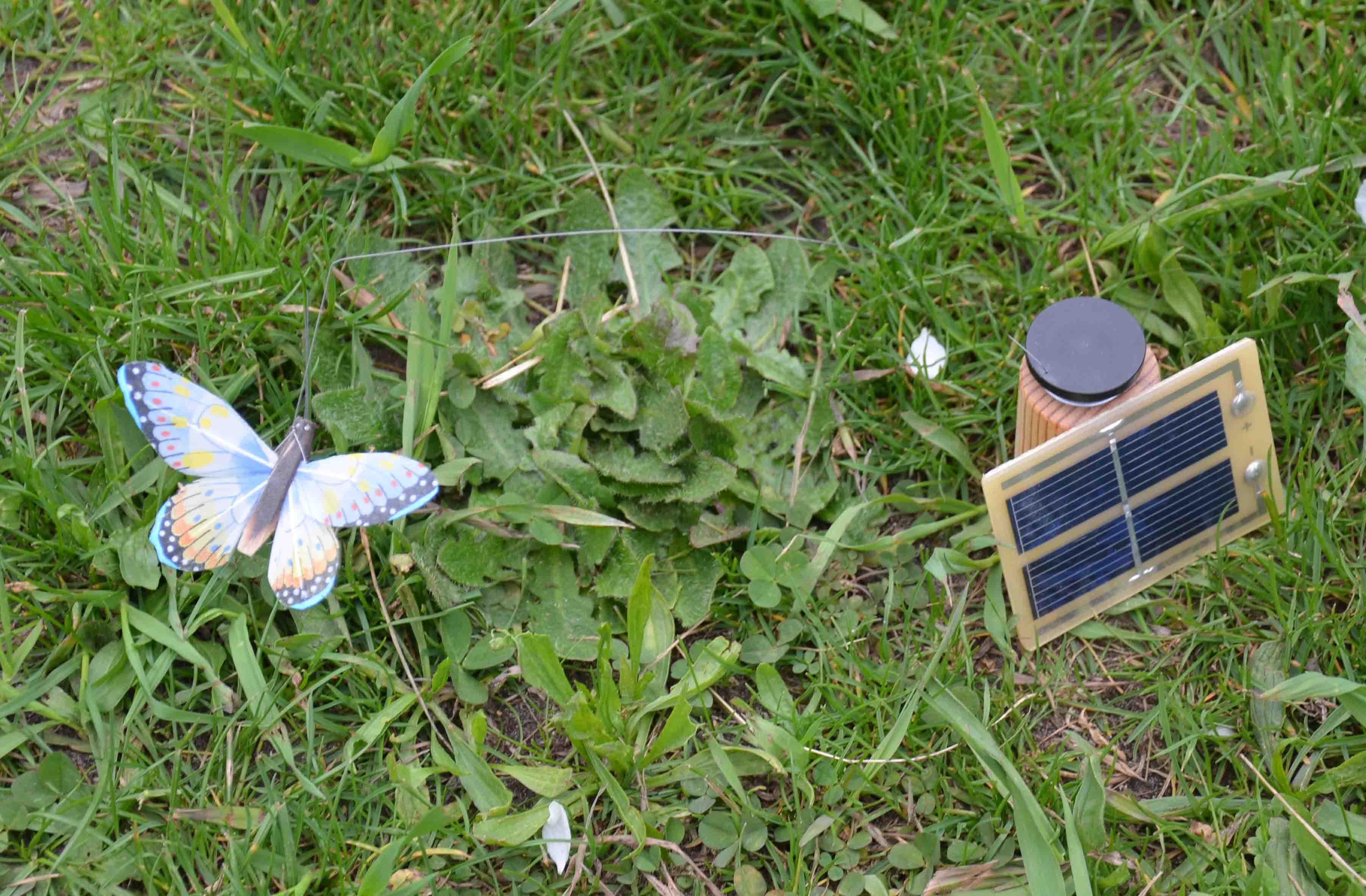 It's here that we find the new works signed by Agam : Polyphonie électronique (2013) and Carré indéterminé (2013). Actually, these pieces have nothing to do with the traditional large works of Agam, mostly known for his fountains (La Défense in Paris, Tel Aviv). Here we have graphic generation controlled by tactile contact.

Santiago Torres follows the same kind of design. And, compared to his previous works, he has added gradations to his geometrical forms. Are shown here : Composicion Roja. Hommage à Le Parc 46. (2013). and
Composition Noir et Blanc. (2008).

Cruz-Diez : Interactif. Is it a game, a tool, a (music) score, or properly a work of art ?

Carlos Cruz-Diez proposes Interactif (1995-2001), a sort of graphic tablet, with three set of tools : color, shape and moves. But he does not considered it as tool, but more like a musical score. The sceen permanently keeps written (in French, at least in Paris) : "As in a musical score, the interpret enters the artist's language and spirit". This spirit is defined here mainly by a system of vertical stripes.

Interactive, these works are. But within rather limited action spaces. And, they may be signed by great names and hung in prestigious galleries, they dive directly into the market of "Apps" and there have to face a fierce competition. To take just a recent work, La machine à rêves de Léonard de Vinci (2012) by Nicolas Clauss and Olivier Alary (produced by Universcience) seems us to propose a much richer content and gameplay... and can be downloaded for free from the appstore.

For these software works, the long terme durability will be what the sofware market will allow them to get. At least are they not, as the mobile sculpture works above, in danger of physical breakdown, or simply wear and tear. But in any case, very little warranty is given to the buyers. The deplorable loss of the hundreds of artistic CD-Roms done in the 1980-1990's is left untold... if not perhaps by the collectors market. At present, it seems that the best hope of longevity has to be found in widely spread file standards (for text, music, still images and videos), and artists as well as buyers are generally wise enough to make this type or record.

Wee, eventually, spring is not summer. The marvelous upsurge of digital art in this 2013 spring has yet to reach a maturity. It would require, notably, at least a collective effort of standardization coupled with solidly grounded (legally perhaps more than financially, since funds may come from collectors and donrs, and labor from free cooperatinos, so intense nowadays, due parly to the web) institutions.

(This paper is a development of a first annoucement).