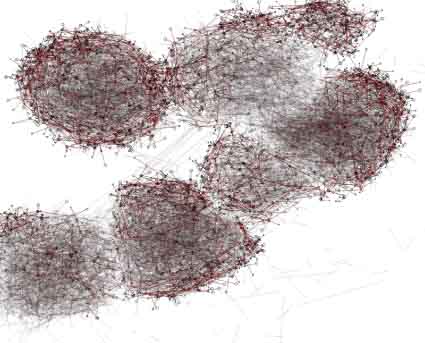 François Zajega at a recent meeting in Galerie Charlot, said us that a truly generative work never performs exactly the same, and not always at its best. It behaves like a real being, uncertain and ephemeral.

Some days before, Yves Bernard, of Imal, told us about its collection of several art CD-Roms, and the fact that most of them can no longer be played with. Florent Aziosmanoff makes similar observations about his work Little Red Riding Hood , using three Sony Aibo dogs, no longer manufactured today. And we made similar observation about the impressive creations of LAb[AU] shown at Galerie René.

Well. That's the price to pay for the wonder of creating life, a wonder that share generative artists, and that they try to share with their public. Life is fragile, and lethal. Then, should we continue to practice generative art, to sell and to buy generative works ? After all, ephemeral also are all the performance arts. Callas was not always at her best on stage, and all performers must stop playing some day.

But the digital brings here another magic. Recording began with stone and paper, progressed with electricity and mechanics, and reached a global and high resolution capacity with digital storage and networks. Ephemeral ? Yes and no : life has been present on earth for four billion years, and human beings for hundreds of centuries. The secret : its digital DNA code.

More than that, we know that more and more resurrect to what seemed that it reached also uncertainty of behavior and nealy certainty of death.