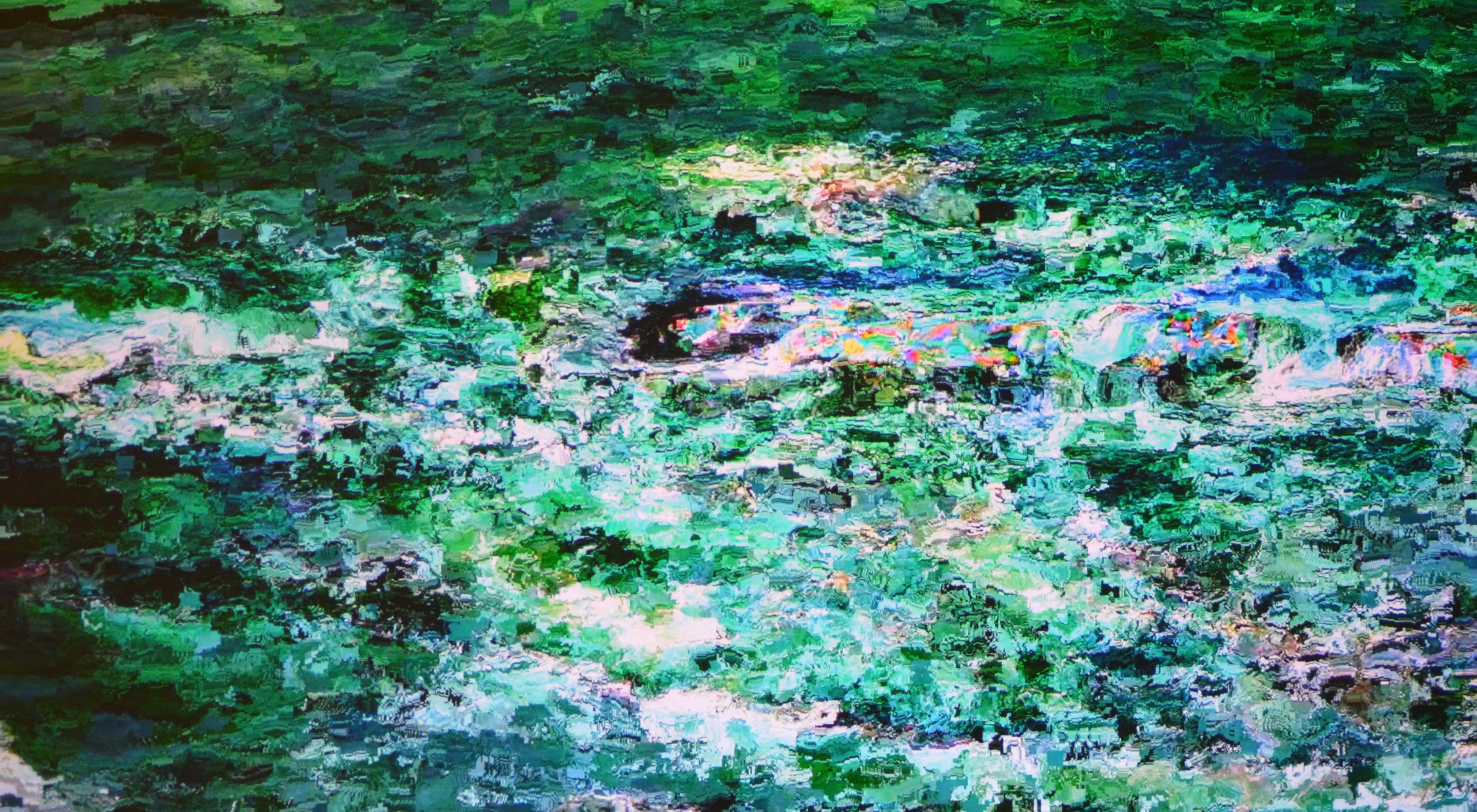 The recent presentations of Jacques Perconte's work (see below) show a deepened and widened mastery of his video image techniques. He keeps faithful to its original line : use the defects (or border effects) of compression/decompression algorithm to reach aesthetic effects (a kind of glitch). . We discused the pros and cons of such a technique in our last year's post in february 2012. We think that he progressed on two ways : a softer use of his effects, and a richer palette of time structures. 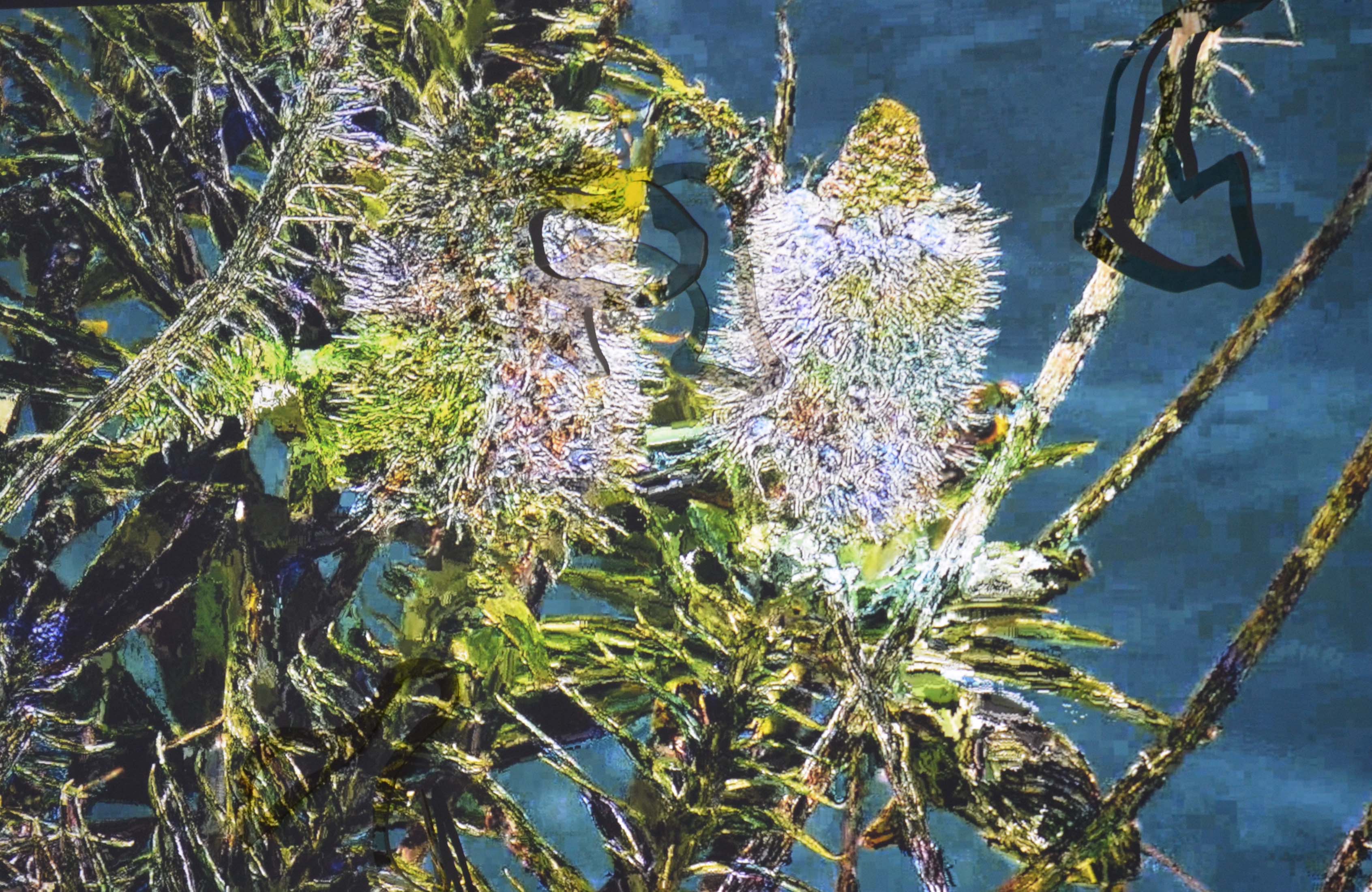 One image from the demo, using mainly Madeira's landscapes and nature. Max MSP programming and hand control may take you any time anywhere anyhow in the original video and its alogrithmic transforms.

The softness, or suppleness is immediately perceptible in colors. Last year, some works (for example the boat trip in Marais Poitevin) nealry kept untouched the nature colors, with only a play on the borderlines of main shapes. Or on the contrary, he made a strong, let's say fauvist, use of strongly saturated tones. This year is, for most of the works, the palette was (a little) has a more pastel fell. A little too much, a little too commercial perhaps, will think ascetic minded amateurs. Let's rather enjoy, and so more so than he is still very much able to dive into high saturations when he wants.

Softer also are his calls to the most disturbin algorithmic effects, like monocrhome squares popping scattered or by waves.

But more innovative and importante in the long term is, we think, a creative and varied structural timelines set. Last year, we saw videos in loops, or a classical short film structure (Après le feu). Now, controlling the compositing and time editing with 3DS Max, he become more and more generative. 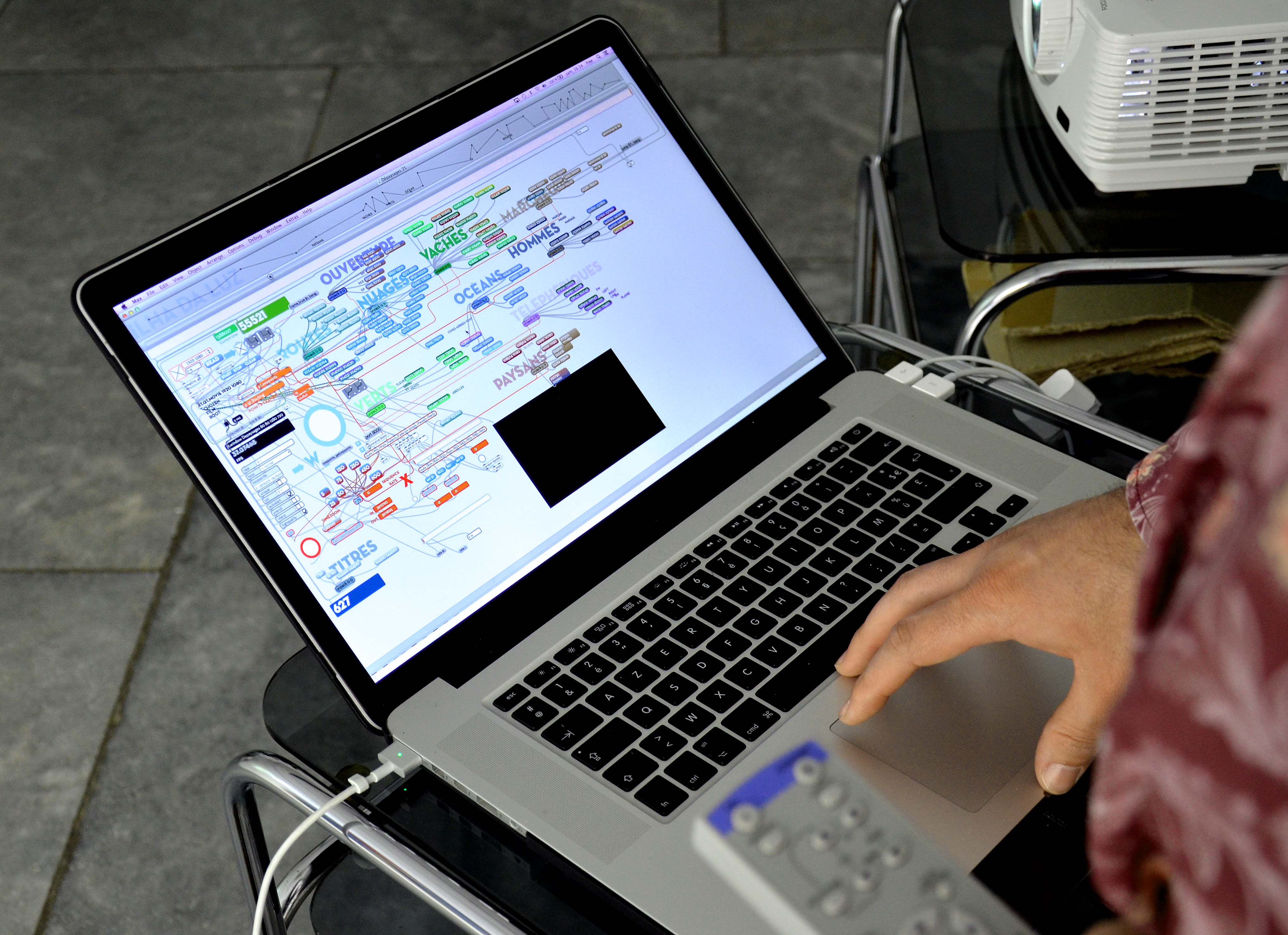 Perconte's hands : one for the projector's congtol, the other one for the keyboard and touch pad. This latter reintroduces in computingsomething of the analog control devices familiar to a DJ.

A first way is the construction of possibly indefinite and non repetitive schemes, editing and compositing elements taken out of a large video file taken as a free reserve of assets. He is not even restrained to the traditional film editing by cuts, more or less shaded. He can have a new image enter in the present one, reaching continuitiy, unless he chose to make a break. That could take him to more and more powerfully generative structures, like for instance the series of Thomas Israël with Metacrane. In such programming landscapes, the sky is the limit.

A second way is the to keep the hand in the process, playing with assets and transforms as a VJ. The keyboard and touch pad of the laptop become a surface control, with as well discrete elements through the keyboard and continuous ones with ghe touch pad. And, in the Charlot's presentation, he gave sound to the stage with the help of the music composer Eddie Ladoire. It's interesting to compare the hand moves and positions, more "programmatic" for Perconte, mor "interpreter" for Ladoire (our pictures). 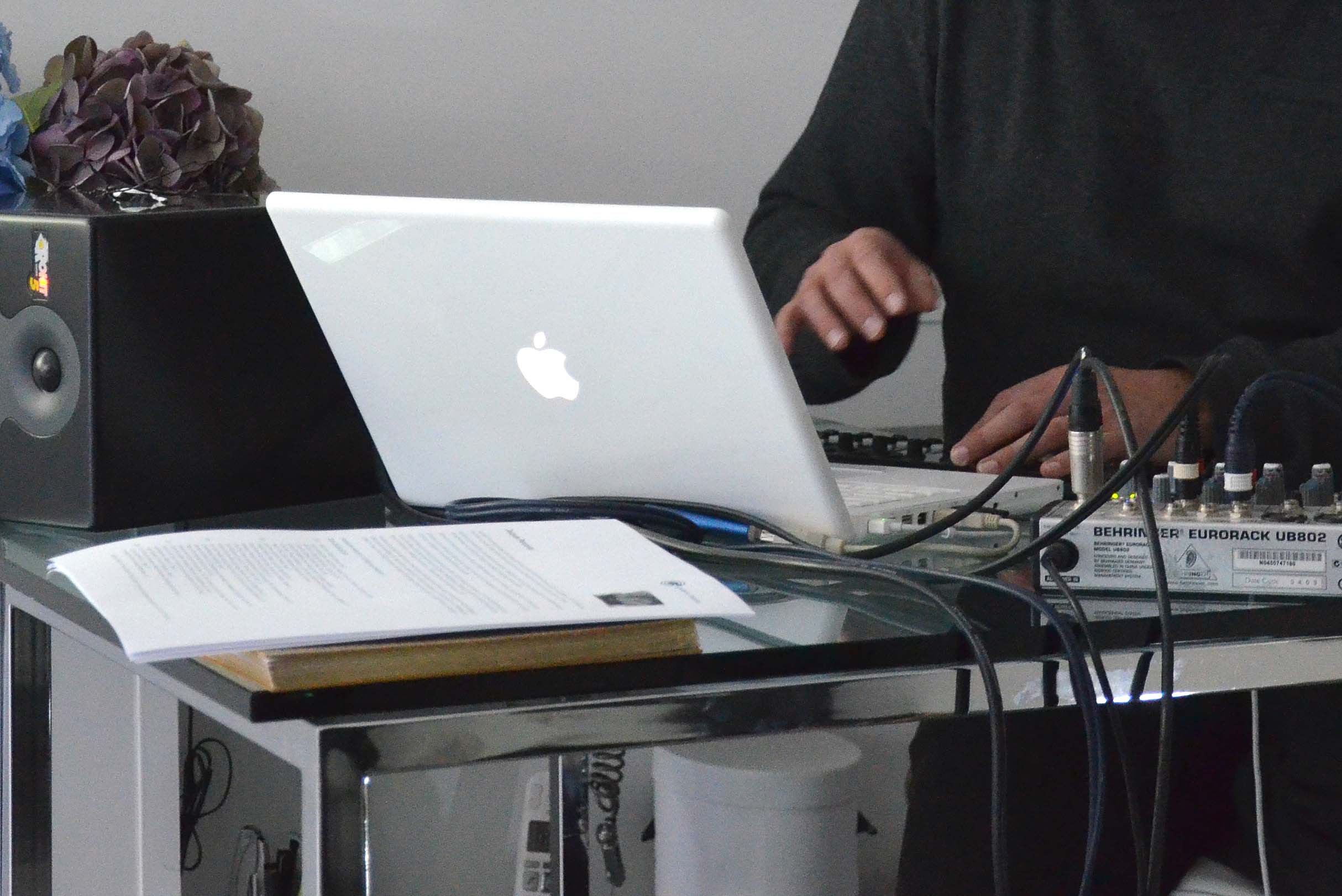 Ladoire hands, controlling the music. Like a pianist's gesture.

With such tools, Perconte has now a vast development space. He will probably stick to the graphic effects which are now his signature (like the "pixels" for Antoine Schmitt or the transcendantal curves for Hugo Verlinde or the visible elecronic components of Alain Le Boucher). But he could dig out of a larger range of videos, why not downloaded in real time from the web. Or he could add some sensors in the process and look for interactions... If he follows this line, he will probably aim, like Verlinde, to spectators able and willing to take their time. Yet, wih all his works, you must go beyond a rapid glimpse to perceive and enjoy the richness of his art. For instance, the nearly white squares generated by the compression/decompression process vary in size, the rendering is more or less non-realistic...

Well, come and see ! The show at Charlot's will be open till june 29. And, if you are for more technical preseentation, the artist and Valery Hasson-Benillouche, owner of the gallery, will receive the Siggraph members, the Algorists and the gallery's friends.. An inscription page will soon appear on the website of the Paris ACM Siggraph.