Let's here add some personal comments to the data you will find on diccan's Siggraph item. or on the chapter's website about the presentation, on On oct. 8, of the 1993 edition, with a set of complementary contributions (part of them will be available on the chapters website). Many points of this analysis are disputable or hypothetic. But the matter is of importance for thousands of artists and professionals, and the communication strategy of ACM Siggraph makes difficult an precise and secure analysis. Art critic is nowadays scarce or commercially oriented, computer press lacks resources to deal seriously of a so specific domain. A French exhibitor told us that he was surprised by the weak press coverage of fhe event, compared to European similar shows. That may be due to a communication strategy which makes quite difficult for a journalist to get information, if only a press pass.

Attendants (in blue) and exhibitors (divide by 100) from its foundation in 1974. Figures come mainly from the book CG01, by Terence Masson ( Digitalfauxtography, 2007). and Siggraph reports. Some figures were missing and we made interpolations.

Several issues call for further analysis and reflection, if not of strategy for all the actors of the field (individuals, corporations, public authorities): the decline of Siggrah attendance, the 3D printing fad, the "French touch" tease and the relations between computer graphics and the "Art world".

If there is a regular oscillation from one year to the next one (with high values for the Los Angeles venues), the global trend is on the decline since the 1997 peak. The waning is now slower than just after the 1997 peak, and with the some thousands of Siggrah Asia visitors, we are not far from stability. But this downward trend goes along with dramatic events in the profession: the bankrupt of Rhythm & Hues (who produced the awarded film Life of Pi) and the closure of Pixar's facility in Vancouver. But it contrasts with the strong growh of the computer graphics market, as presented by Jon Peddi Research (see the picture).

We suggest some possible explanations (not mutually exclusive):

Siggraph attendance Vs. CG market. From the communication of Jon Peddi Research, quoted by Jean Segura.

- 1. A transfer of productions from Hollywood to emerging countries, where taxes, salaries and syndication are lower. These new populations are much less able to take part in Siggraph than Californian artists and developers, the traditional attendance of the show. ACM has launched Siggraph Asia in 2008, but its, as far as we know, a large success in audience. ACM globally has invested to foster a European organization, with presently no spectacular results.

- 2. Rising costs of long haul transportation and local accomodation. Combined wih ecological considerations, it could push Siggraph to make a larger use of telecommunications and Skypewise solutions. That, after all, would go along well with the virtual worlds afforded by computer graphics.

- 3. Marketing and communication issues. Our feeling here is based on some facts:
. One of the exhibitors told us his surprise to be so little appealed to by press. Press, be it computer, art or general, does not talk about Siggraph. We have made some surfing on Internet through Google. See our results (sorry, presently only in French). The event is talked about only by Ke Sen a Taiwanese computer graphics professor, who is appreciated by the scientific community since he gives lists of related papers, including the web links to dowload them freely, an Australian group of "entertainment artists", who publish a long diary of their visits to the show (long but far from complete and synthetic, but not deprived of humour) and, in France, by the Paris chapter.

. Siggraph has had (and has still, but declining as far as we know) a superb US and international network of local structures, called "chapters". They contribute to the Siggraph fame and audience, encourage searchers to submit communications, students to volunteer, and sometimes even (certainly in the French case, probably also from other countries) to the selling of stands in the business exposition. Organizations, in general, consider such a network as a precious asset, which calls or personal involvment of the management at high level as well as (sometimes heavy) financial support seen as an investment. That's not the case for Siggraph. Just give a look the chapters pages on the website. To become a chapter is consider like a sort of privilege granted to the good guys. They will receive no help, they will be constrained by quite strict rules, required to send an annual report. Their main leaders must subscrive not only to Siggraph but also to the ACM. They are called (not required) to attend an annual worshop where they are considered not as partners and useful contributors, but as pupils who should know better.

. Our general impression thatSiggraph (and ACM) has on all the facets of its activities the same behavior that is so successful with communication authors. In short "We are the best, the inescapable leaders. Then, be you an artist, a student voluteer or a journalist, submit your proposal to our selection systems, and you can have some hope to accepted and be permitted to come, provided you pay your transportation and accomodation costs" (and sometimes your pass).

Such an atttitude has been - miraculously - successful, when the topics dealt with at Siggraph were dramatically new and fascinating, and when the profession offered nearly unlimited jobs and career opportunities. It is no longer the case. And it explains that Siggraph is on the way to be only a meeting of applied research (and perhaps of innovative startups).

- 4. Substantial progress in production and post-production tools. Lighter and of easier use cameras, workflow automation, dematerialization of assets and efficient procedural software to generate animation, from motion capture to rendering and distribution. That reduces the armies of low level personel in cubicles rows and increases the role of high level designers and engineers. This trend can be observed in many professions today (for instance in medical biological analyses, where blood samples are more and more processed in large automated centers).

Then we could say that, from the origins up to 1999-2000, computer graphics get muscle and massive diffusion thanks to cheaper and more efficient machines. Higher standards of living call for media higher consumption and demand for higher quality. In the subsequent years, economy tends to stagnate, as well as interest for new gimmicks like HD and stereoscopy.

Strategically, that should dissuade the younger to look for jobs in this industry, unless they can get an engineer level education. It would push Siggraph to become mainly a scientific conference, with smaller budgets and venues. Smaller but still impressive, compared to other scientific and technical meetings.

This year, and it is not the first time, a french student film won the Best of Show award (while the best student film award went to Germany). Cécile Welker reminds that, after her presentation in the Art papers section, a lot of hands raised to ask questions about the "French touch", a recurring and teasing isssue.

French dynamism was also attested in Siggraph by
- a good number of scientific communications
- some 15 companies in the Exposition, 12 of them grouped in a well located "France" stand
- at least one impressive presence in the Emerging Technology part, the full exoskeleton of CEA.

Besides, the Paris chapter of ACM Siggraph is presently by far the most active in Europe, if not in the world (but perhaps for the New York and Los Angeles ones).

Outside Siggraph, diccan has extolled the "French spring" in all this year's art shows. The Fall in Paris opened with an international festival of Electronic Literature, extending on five days and prestigious cultural places in Paris. We have begun a detailed report, see its present state, which gives you links on useful websites.

Siggraph 2013 Best of Show award goes to A la Française, a film by Supinfocom Arles.

How to define the French Touch? And is it even "productive" to elaborate on such a subject? We have tried to explore the field, for France and other regional cultures, in an article which remains open to discussion.

As far as we know, ACM and ACM Siggraph are striving to make true the fact that its "A" means Association and not American. And not without successes, would it be only for the chairpersons of its Executive Committe, where Europeans have been several times elected. And the Siggraph exhibition included several national stands (France, South-Korea and Japan). Will that trend keep on? Why not China and India? "Regionalism" is a way of balancing the negative aspects of globalization. It may also put the stress on the divides and stir more anger than cooperation. Will the American (USA) domination let place to some sort of global democracy? The issue is raised in a lot of matters. On Internet governance, for example, may would like to see it led by some international authority... but the present situation in democracy in Russia or China may also take us to think that, for the moment at least, Uncle Sam remains the best choice.

Computer graphics Vs. The world of Art 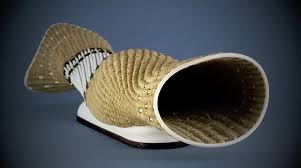 Another issue was raised at the Art paper session and illustrated by the Art Gallery (both are beautifully presented in a special issue of Leonardo, numbered 4/2013). Buf for animation cinema, Art and Siggraph have never been very good partners, as is shown by two recurrent facts:
- from a Siggraph standpoint, Art has always been a quite small part of its shows, talks and attendance,
- the world of Art has always ignored Siggraph.

The 2013 session made no exception. The Art Gallery remains a rather small art exposition. Thanks to MIT Press and Leonardo, we have a luxury presentation on paper and online of the works and the art papers. Lets note the stress on 3D printing, the new Gold Rush of computer creativity. The star were the baskets of Amit Zoran, whose presentation is online. At the scientific conference, tells Guillaume Gilet, several papers dealt with communication between digital simulations and the real world. 3D printing Make it stand, balancing Shapes for 3D Fabrication. And Transmedia not forgotten. with two projects where Paul Debevec. 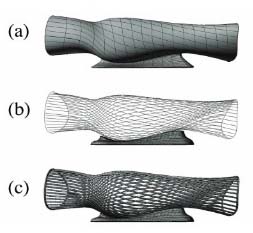 Three design stages of Basket IV. (a) lofting and twisting a sleeve surface to create the overall shape, (b) slicing the sleeve to hrizontal stetches, and (c) creating a solid structure that can be 3D printed.

Can the Computer Graphics/Art Word divide be bridged? Here also Paris (and Brussels) lead the way, with some digital works in Art Paris, Art Brussels of the Fiac, the traditional venues of contemporary art, with colocated digital art expositions, notably in the Paris Fall art week. In another artisic domain, literature, Paris also bridged the gap with a full week of events called Chercher le Texte (we shall soon review it). The digital facet was notably represented by the American ELO (Electronic Literature Organization), but the event was hosted in not so digital places like Centre Pompidou and Bibliothèque Nationale de France.

From bits and pixels to cloud computing and spreadable medias?

In conclusion, we feel that computer graphics is a turning point, like more generally art and medias. After the Gutenberg galaxy and the Marconi galaxy (to take the McLuhan's words), we are entering a new world, with blurry borderlines. A world of "spreadable media" says Henry Jenkins (see [Jenkins, 2013]), not easy to wade in, be it for the artists, 1the producers, the curators... or the critics.