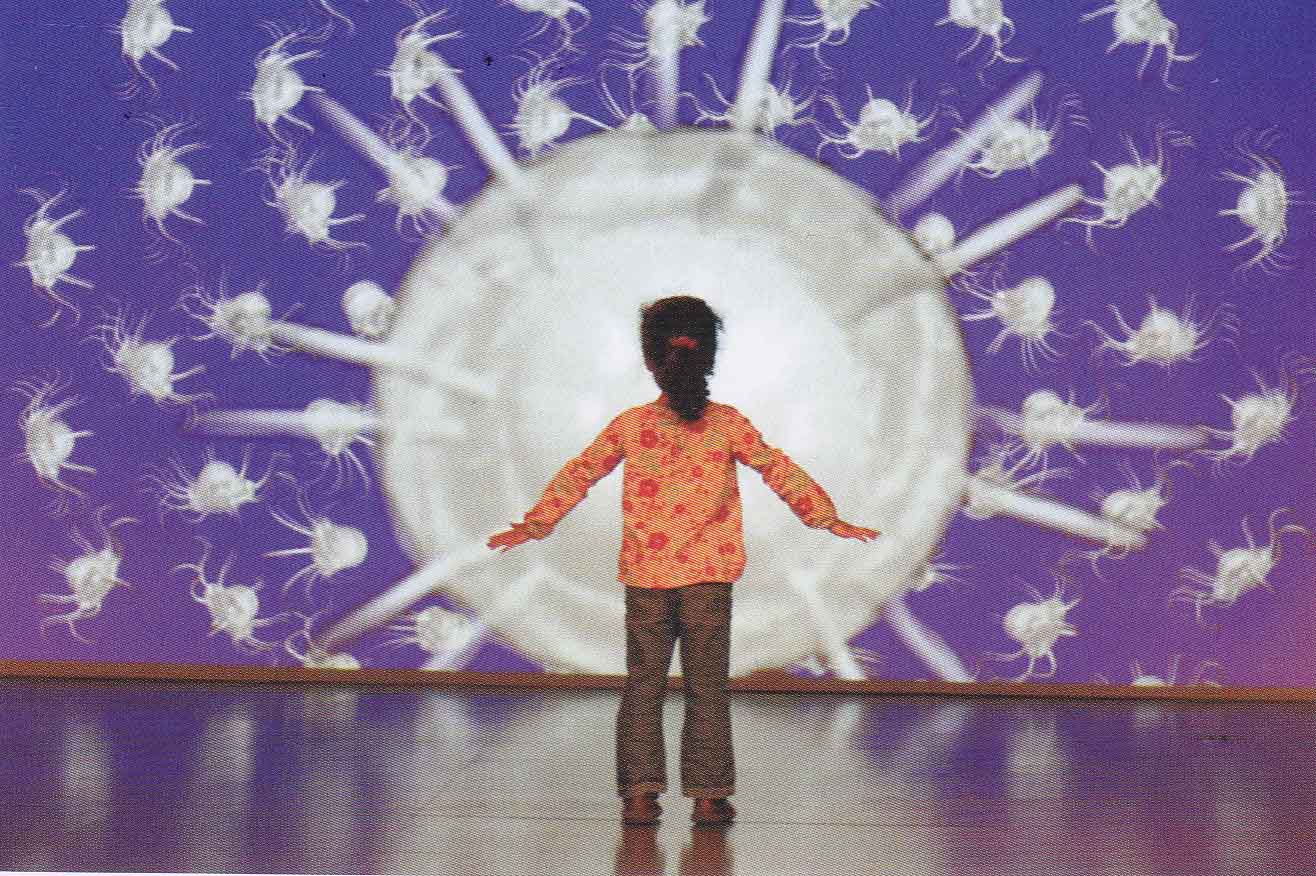 Art may be said behavioral if the work gives interesting answers to the spectators actions. Here, a presentation of Viens danser, by Catherine Langlade, at Issy-le- Moulineaux's (Ile-de-France) Cube. (The work is described in [Aziosmanoff].

Any being of high level includes three operating stages: perception, behavior and expression.

Behavior properly speaking is the stage where meaningful data provided by perception enter a decision system which will take to action. It's essentially a code type operation, with the typical basic programming expressions :
if (something is true) then (do that);
or
in case when (the value is 257), then (do action numbered 257);
or, in very low level languages
if (something is true) then goto line 257;

Beyond programming stricto sensu, the term code can refer to any form of "law" or "best practices", or simple "conventions".

It remains to be proven that behavioral art really exists... beyond perhaps the small dancers of Michel Bret and some works by Hugo Verlinde. From a digital standpoint, a true "behavioral art" should come out of independent agents, and not directly from the author's. Of course, performance arts are widely based on human players behavior. Jérémie Szpirglas notes, about Georges Asperghis : "It is not precisely a song, but a succession of various vocal behaviors commanded by the text".

Two examples, quite far from digital:
- Behavioral art according to Daily Planet 11/30/2009.
- A video of behavioral art on the London Waterloo bridge.

1. Some references
2. To go farther
3. Sciences dealing with behavior

- Florent Aziosmanoff, in [Aziosmanoff], goes quite far to define behavioral art (or work of art). Notably, he proposes a design method including a "behavior motor". He makes out three levels
- setting a "reading contract" with the public,
- expressing the main discourse of the work,
- behavior facets that can contradict the second level.

- Evaluation is a major facet of behavior, including evaluations of the work being created or played.
- A list of steering behaviors, with references, by Craig Reynolds.
- In the 3D VIA Studio, by Jacques Vernus, "A behavior affords to define the reactions of an object related to the interactions it bears. The interaction may be as well with the user as with other projects agents. Unlike a function, a behavior can be interrupted (at least in this product).
- Our Max robot, its diverse behaviors according to inputs (1979, text in French).

It would be interesting to dig into this concept, in extension and comprehension.

- Create a list of behaviors: welcome, refusal, aggression, seduction, appeasing, stimulating (religion, sex, war).
- Include there passive behaviors: an oil or acrylic painting, with some thicknesses, reacts interestingly to lighting, spectators position.
- On the other hand, describe purely internal behaviors, expressing in depth harmony or troubles. They can follow proprioceptive effects.
- Widen the range of these behaviors using more and more memory, including for instance behaviors of recognition of a spectator, a kwnown landscape, a communication protocol, or a flirt in a scenario.
- Then attribute features to these behaviors, using examples from nature or art. How does a behavior is expressed in a works space (a canvas or screen rectangle), or nature inspired space... You don't behave the same way in a desert, a rainforest, a ski run.
- Give time features. Short cycles (vibrations), medium (an object moves through the work's space), typical events (friendly meeting, dispute, battle, explosion, battle) and the largest cycles and the life cycle of the work (examples in Borea (by Verlinde) l, and maybe Schmitt's works).
- See how elementary behaviors organize in strategies and hierarchies (many examples in robotics, for instance, at high level, aim to a target, at low level, dodge an obstacle).
- Make a distinction between individual and group/collective behaviors (The three Aibo dogs in The little Red Riding hood by Aziosmanoff), crowds, armies. More generally, see how a given set of behaviors is typical of a character.
- Classify the ways of representation of these behaviors, so that they may be perceived by spectators. Visual, audio and combination of both. Don't forget face expressions.
- Understand what kind of behavior a spectator expects from a work, according to the work type and its assigned function.
- Develop experimental works:
. a work which decorates a home room must generally behave rather slowly and be appeasing; it could vary from morning (stimulation, energy) to evening (rest and entertainment, or love),
- a work in public space or town (Verlinde's work for Erevan in Armenia),
- a work in the entrance hall of a corporation (rather slow and majestic but friendly), a masterpiece in a museum (strong behavior, calling for attention and retaining the spectators attention by original aspects, possibly violent), a church...
- films and games, with a strong spatial and temporal density.
- Evaluate these behaviors according to different scales of values : social, moral, educative... From the art standpoint, aesthetics is primary. But which behe

avior can be considered beautiful? Elegance, grace, expressive power, clarity...
- Analyze systematically the digital works (let say, a meaningful panel or works) from this standpoint. See how such and such technique, algorithm category... fits with the expression of such and such behavior. The choices done by the artists. From this standpoint, artists biography may be useful: why and how does this artist translate this kind of behavior?

1. Ethology. See a superb book by Jacques Goldberg, Ethologie animale et humaine, communication et comportement. (Editions Frison-Roche, Paris 2010). It includes a lot of fine data, possibly useful to artists. For example: man is fascinated by animal behavior... two trends derive of this in investigation : we compare, on every aspect, animals and humans... or, on the contrary, we see animals as pure machines; with only deceptive appearances with humans.
As for human ethology, we can quote the works of Jean-Claude Kaufmann, notably Ego, une autre vision de l’homme et de la construction du sujet. (Nathan, Paris, 2001)

3. Computer science. A program is nothing else than a text describing the behavior or a computer (and commanding it). Any formula of the “if then" type is the modeling of a behavioral answer to a given situation. A fortiori, in object oriented programming, the methods are precisely behaviors defined for every object.

But is all that very useful to behavioral art? The nearest artists are mainly algorists. Some of them aim explicitly to autonomy (seen abstractly and avoiding, sometimes carefullly, any reference to life (Digital art manifesto of AntoineSchmitt). Others aim to reactivity and interaction, but with little autonomy (Lozano-Hemmer, for instance). Recent works by Verlinde push the concept farther.

Besides, we think that behaviors will become really interesting when the works will include a substantial memory:
- a sort of general culture, like the Watson machine;
- as a knowledge of the spectators, globally (kinds of groups) or individually, with possibly recognition and adapted welcome.

By the way, neither ethology nor robotics seem concerned by verbal behaviors, so fascinating they can be, and seemingly easy to be programmed. Excellent things here in [Wardrip-Fruin 2009].