N5M. The Next Five Minutes. A meeting about tactical Media" , a term which emerged in Amsterdam, 1993. 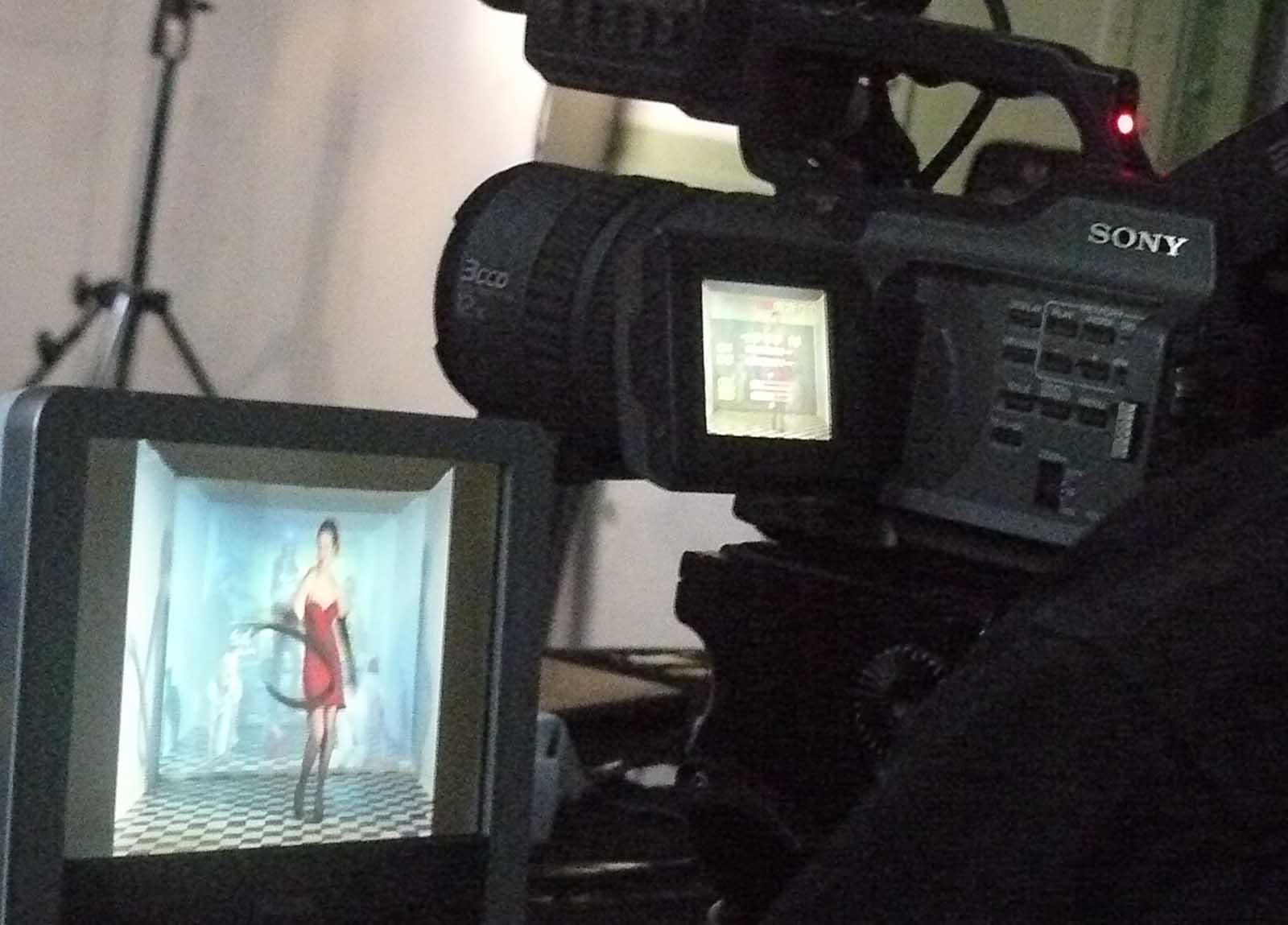 Nabian Nashid.
> Chameleon Lounge (2010). In cooperation with Rodolphe El Khoury. Futuristic furniture, interactive and sensitive.
- Note in 2009: "Currently a first year doctoral design student, her research interest is focused on integration of responsive networked digital media in design of public spaces, and its impact on spatial experience of the participating public. She is interested in exploring the possibility of having architecture without a place and to affirm a complete, independent space beyond the constraints of place or time. " 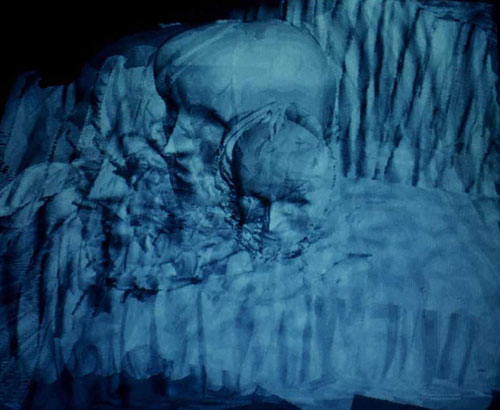 Nagorny Frédéric Animation film maker, since the end of the 80's, in collaboration with Raymond Perrin.
> Le Pantin (1990) The Paris ACM Siggraph page .

Nake Frieder. Wikipedia One of the first digital artists exposing in an art gallery (according to Faure Walker)  1965.
- At the Computer Institute of the Stuttgard Polytechnic, he used the Graphomat Zuse Z 64 drawing machine to produce full-color plotter drawings".
< Construction and Intuition: Creativity in Early Computer Art. in McCormack 2012.
- Quoted by [Couchot 2003] p. 40.
- Works in the Victoria & Albert Museum.
> Random walk through raster. (before 1976°; See an image , and reconstituted code in the Recode project.
> Zufalliger Polygonzug (1965) Quoted by [Lieser] with a picture
> 7.4.65 Nr. 1+6 (1965), quoted with picture by [Lieser] 2015.
> Rechteckschraffuren (1965). Quoted by [Lieser] with a picture, and another work of the same period. - 7 pages with pictures in [Dreher].

Naleppa Götz. Sound (and other fields) artist , teacher and manager. His biography.
- Since 2008 , freelance producer and sound artist.
- He founded the weekly slot "Klangkunst" (sound art) at Deutschlandradio, and was its responsible editor for 14 years.
- Solo pieces and composition since 2000.
> Robinsonate (1983), his first project, created with the Transit Communication group.

Nam Hye Yeon. Digital media, interactive installations and performance video.
> Kiss Controller (2011). A video game, where the moves of a ball are controlled by tongue moves during kissing. Web page.
> What color is it ? (2005) 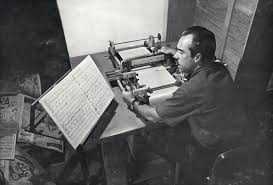 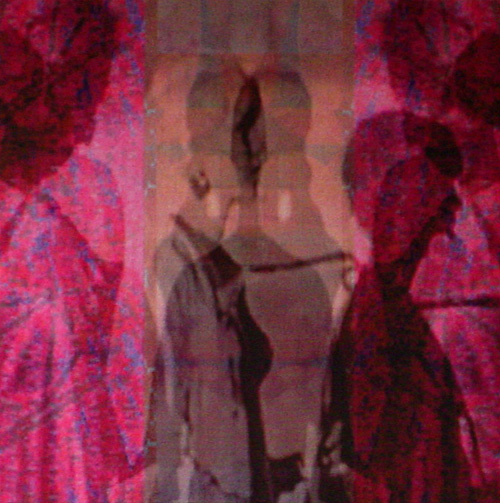 Nechvatal Joseph. Wikipedia. Art site . Blog
< In June 2014, exposition at Galerie Richard (Paris). Works in the same style, complex and delicate, with a quite modest appearance due to a matt printing on canvas.
< Dynamic tensions. A discussion between Taney Roniger and Joseph Nechvatal (1/2013)
- Viral Symphony
< Immersion into noise. Open Humanities Press, an imprint of MPublishing, University of Michigan Library, 2011
> Anus (2011). Relations between the human body and Cosmos.
> Viral Venture (2011). Video of this event (February 2011).
< Towards an immersive intelligence", New York, Edgewise, 2009. This title groups several short essays, which give to think. Let's quote literally "... the immersive art recipient learns of his or her own hyper-embodied, summational possibilities by triggering a rejection of self-stultifying mental habits... > Esthétique et complexité (2011 c.) Accessible online. Peace and serenity on minimalist sound and images.
> Terra incOgnitO" (2009).
> Virus Attack (2009) Video.
> Becoming multiple (2007). Computer aided painting [Forest 2].
> St. Occluded PornoLog (2005) [Forest 2]
> Viral Counter Attack (2004). [Moulon] p. 108 with photo.
> Voluptuary droid decolletage (2002).
> Computer virus project (2002), a collaboration with Stéphane Sikora, programmer. [Forest 2].
> Body in circuits (1991). Shown at Show Off 2013.
> pile (erogenous) 55 sybaritic (1999) Quoted by [Lieser] with a picture
> Closer (1987). Shown at Show Off 2013
- One page in [Berger-Lioret], p. 72. Quoted by [Chirollet].
- [Paul] presents The Birth of the viractual et Voluptuary droid decolletage (the original titles contain voluntary case transgressions). The process works in two phases: handling and deterioration of images, using a viral software, then impression of the works without author's intervention. It is difficult to know if the "robot" is more than a simple printer.

Nees Georg Wikipedia. Nees began programming computers in 1959. Circa 1965, while working at Siemens in Erlangen, Germany, he began writing programs in Algol that used random number generators to generate drawings automatically by controlling a Graphomat Z64, a primitive flat-bed pen plotter designed by Konrad Zuse. In order to create this art, Nees also wrote some of the world's first graphics libraries, packages named G1, G2, and G3. Nees intervened manually in the production of the artwork by determining when the image was complete. Another piece, variously called "Schotter", "Gravel Stones", or "Cubic Disarray" and created by Nees between 1968 and 1971, depicts a transition from order to chaos: a regular grid of evenly-spaced squares at the top of the image is randomly turned and displaced until, at the bottom of the image, the grid is completely disrupted Nees's artwork "Sculpture" (1968) was one of the world's first computer-generated sculptures; it was exhibited at the 1969 Venice Biennale. - Works in the Victoria & Albert Museum.
- Untitlled. (before 1976). See images of this and other works, with reconstituted code in the Recode project
> No Title (1971) quoted with picture by [Lieser] 2015.
> k27 gevwebe (1965-68), Quoted by [Lieser] with a picture
> K38 Schwarm (1965-68) Quoted by [Lieser] with a picture
> k15 Irrwege (1965-68). Quoted by [Lieser] with a picture
- Quoted by [Couchot 2003] p. 40. - 3 pages with pictures in [Dreher].

Neitsch Sebastian. Robotics. A member of Fishing for Compliments.
> Impasse (2007)

Nemo. A group of designers founded by Alain Domingo and François Scali;
Not digital in general, but some of his works use a clock, one of the bases of nearly any digital system. Investigation (below) is a forrerunner of generative art.
> Investigation (1988). "A music box/alarm clock produces random music modulated by the parameters determined by the time the alarm clock is set for, soft or violent according to the supposed state of sleep indicated by those parameters.
- Nemo, Alain Domingo and François Scali. Introducdtion by Didier Laroque. GG Editions, Barcelona 1992.

Nervous System. Founded in 2007 by Jessica Rosenkrantz and Jesse Louis-Rosenberg, "Nervous System is a design studio that works at the intersection of science, art, and technology. We create using a novel process that employs computer simulation to generate designs and digital fabrication to realize products. Drawing inspiration from natural phenomena, we write computer programs mimicking processes...".

Neural.it. A website and magazine, both on web and print form. Critical digital culture and media arts. Since 1993

Neusterrer Marcus. An article with images in [Dermineur].
< The Potential and Limitations of Web Art - A South African Perspecdtive (Master's dissertation). See comments in [Dermineur] and an article by Carly Whitaker.
> Entracte (2010), by Stephen Hobbs and Marcus Neustetter.
> Relation V (2010). Painting.

Newmediaart.eu. A blog by Dominique Moulon.

Nikolais Aldwin. Choreographer. Philippe Decouflé is one of his disciples. 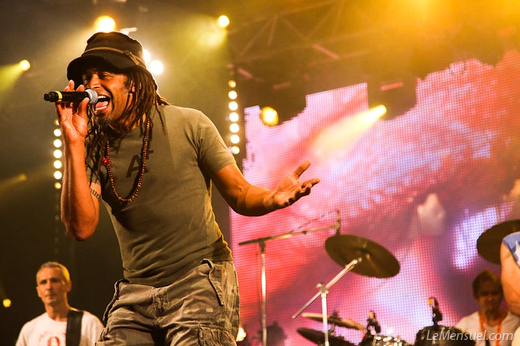 Noah Yannick. A full article about his tour in Sonomag, July 2007. The sound engineer; Hamid Malki, explains the difficulties born from the singer's voice, then the necessity of "a double banana, of which one in dV for Yannick alone". 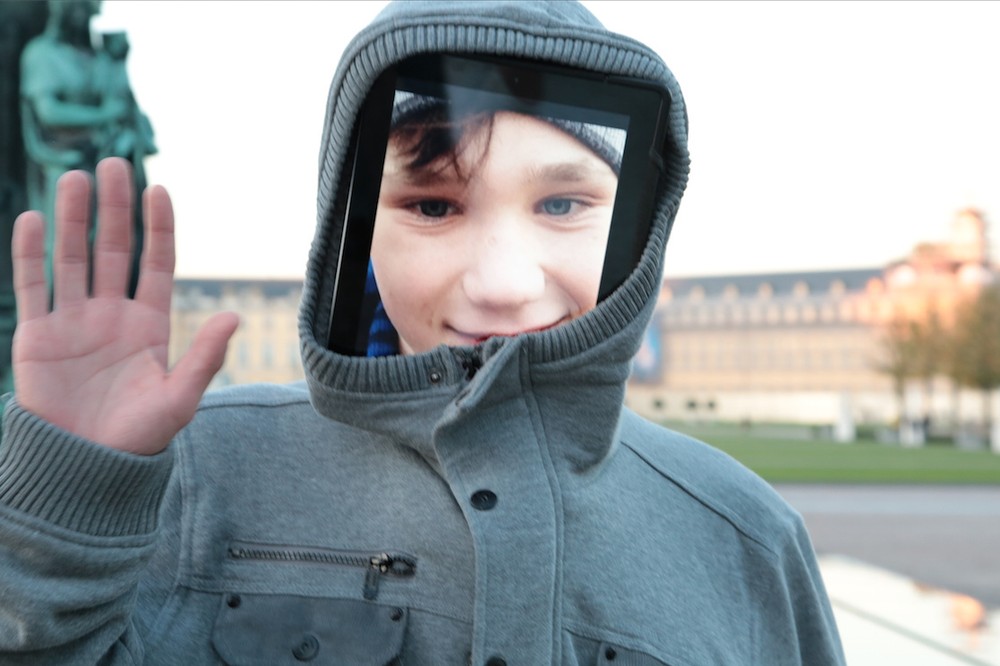 Nogami and his smartphone mask

Nogami Katsuki.
> Rekion byInstallation. Nogami uses various technologies to make humor or alert about the contemporary world. For instance just a smartphone used as a mask in front of his face.

Nonotak Studio. Collaboration between the illustrator Noemi Schipfer and the architect musician Takami Nakamoto.
> Mural in a public housing (2011)

. A fouding member of Wild Shores.

Numediart. The numediart Institute for Creative Technolgies was founded in 2007 by the Unive­sity of Mons. It organizes scientific training and research activities in the area of cultural and creative industries. The topics covered are: audio, image, video, gesture, and bio-signal processing,
> City Light (2014) 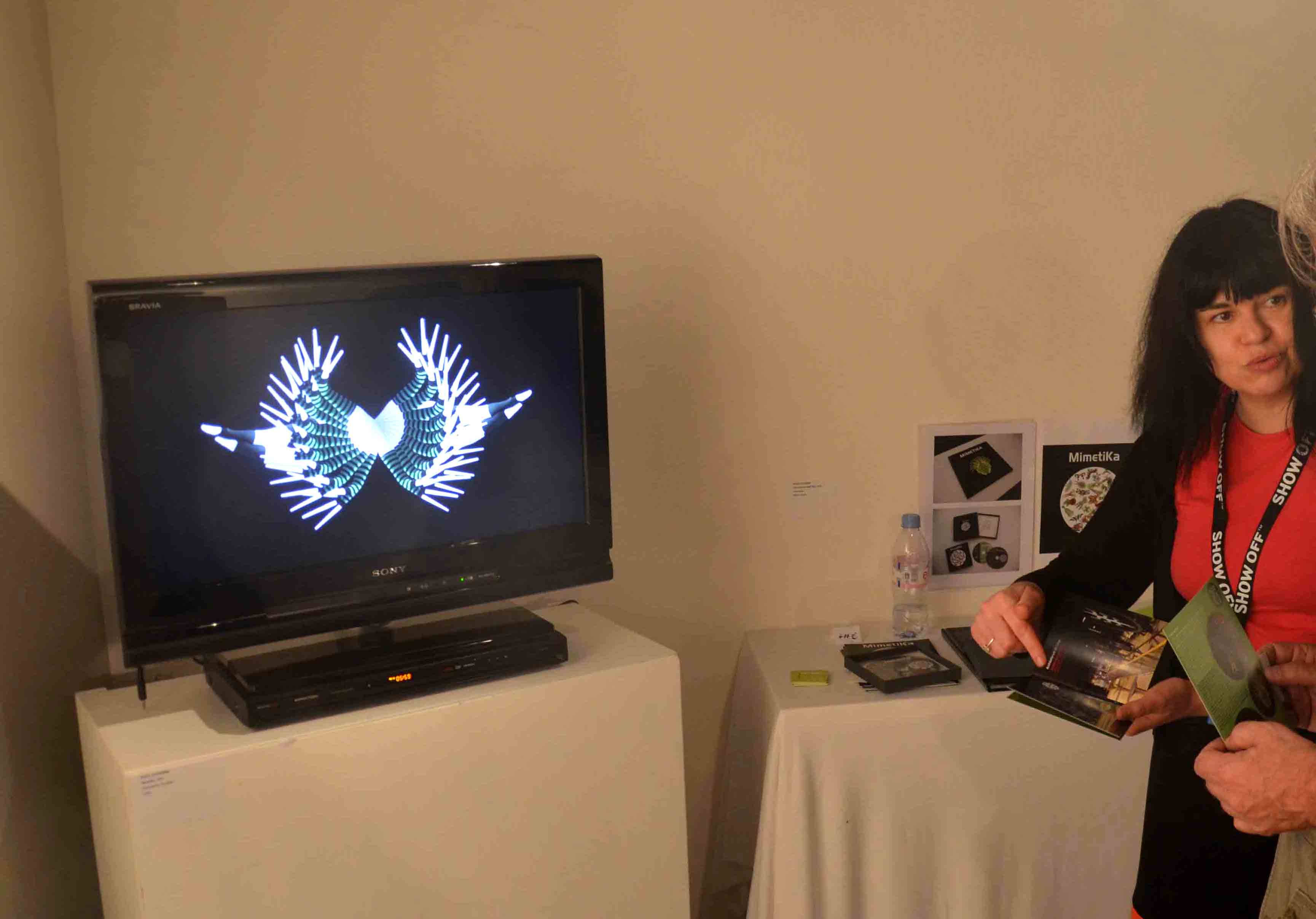 Nyeki Catherine.. Installations and video. She is mainly inspired by biological themes, to present videos and sometimes animated sculpture including videos. Not deeply digital. The videos are frequently telling a sort of true narration, and the public keeps looking, when properly installed, for instance in Gaîté lyrique, using several of the special cabins provided par the Resource Center of la Gaïté. > Mimetika (2010). Nyeki comments (at Show Off 2013, our translation): "I am both ,a plastic artist and a musician. My thematics relates to life pasticity, working at language level (with several languages) as well as sound. The population of Mimetikc is buit upon a gestural mimetic alphabet. Hence I capture the real and make assemblies. I consider my approach as anti-algorihmic, even if it is not politically correct. I have practiced algorithmics a lot, but I want to take control over the programs and not the > Plastika (2010). Not very digital, but humor. Presented at the end of 2010 at Cité des Sciences of Paris La Villette.