Forest on the shoulders of Duchamp 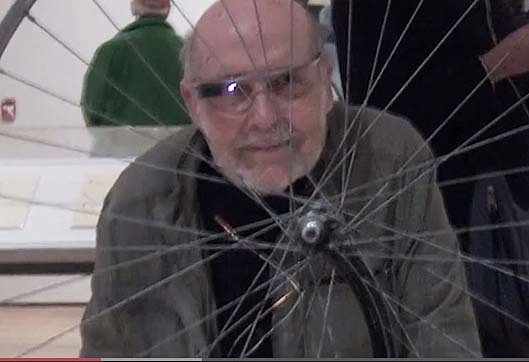 Forest on the shoulders of Duchamp at Moma

Fred Forest is perhaps the only one artist to pretend play the same part as Duchamp vis-à-vis contemporary art. And, like Duchamp's, it's probable that his actions will remain comparatively unknown for long. They don't fit well in the neo-liberal ambient of the 2010's. And somehow are no more pleaasant to the eye than Duchamp's fountain in itself.

But he keeps faithful to himself, to "sociological art" and to his never ending efforts to expose what he considers as the abuses of public institutions, whatever the domain, from the War in Yugoslavia to human rights in South America.

This time, he succeeded in marching a "sociological walk" in NYC Moma, banning Google glasses and followed by some friends. That was his second attempt at a performance there. His first try in this emblematic museum date back to September 23, 2011. He had prepared a comparatively formal action, with four accomplices. But they were promptly ousted by the local security people, since performance was "forbidden for whomever has not received a proper invitation from the institution’s administrators and thus been graned permission to do so". (See Video).

The second, in may 2014, (See Youtube ) took place without opposition, but in quite covert way, wih just the glasses to give a digital facet to the happening. The feat is commented by
Art currents.