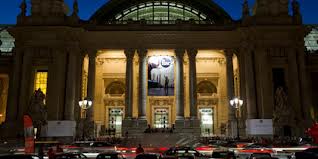 This week is rich of Art events in Paris. We shall say more in the days to come, but we made our first visits yesterday and today at Slick, Fiac and Art Elysées.

There was no special Fiac digital show on the embankment (like last year) : Te Fiac Off (or more exactly the Show Off) was distributed among three sites. See our dedicated paper.

Out of the Off, digital art was a little everywhere. Not very visible at first sight, but nevertheless active and with new works.

Antoine Schmitt, and his cooperative work with the sculptor Patrice Belin, keeps the lead for really digital innovation, combining truly generative art with material 3D, these two components being specially designed to play together.

On this second day of visits, our general impression is that the digital component of art becomes less visible, but that more works are generative. Cinetic art is back, both in its traditional forms (mechanical, mainly) and in new ones, mainly with use of video. Bertrand Lamarche here leads the way with Cyclo-City, combining several cameras and a sophisticated mechanism. But we could as well quote Zaven Paré (who will expose in Galerie Charlot from nest tuesday) or Hugo Verlinde (who showed an experimental combination of his generative videos with a cinetic work by Nicolas Schoeffer (some months ago at Denise René's).

A more subtle come back of ancient topics is attested by Kunste zur Text (Algorithmiques) by Michael Riedel. Here, the work is done by hand, painting graphic symbols over written text, probably in a systematic (algorithmic way). That takes us back to the pre-computer forms of algorithmic art, as well in music (serialists) as in painting (Vera Molnar).

Are we witnessing something as a return to properly artistic, semantically loaded, artistical means (movement, algorithms), at the expense of the computer, just seen as a tool to be hidden in the workshop or the intimate parts of the works ? Well, let's continue to look and see !

Let's propose a first list for your visit (following alphabetic order in each site) in the days to come.

Fiac The website.
- Agam has a work at Denise René. It's a pleasure to see a veteran of cinetic art still creative and active, here with an interactive screen of white points. A no lesser pleasure to see this Gallery, a pioneer of contemporary art, continue to support innovation and (presently rather modestly) digital creation.
- Cory Arcangel some videos on Lisson's stand.
- Rosa Barba plays with cinematographic films, in a cinetic way. Not digital.
- Gregory Chatonsky is on the Fmac booth, with Hisland, a digital video, strongly enlarged, of his own fingerprint and looking like a carpet or a landscape. - Mirza Haaron has some videos at Lisson's. Not very digital, but...
- Bertrand Lamarche is somehow the Gold Medal of these games, with an awarded work in Grand Palais (Cyclo-City - Michael Riedel plays with printed text (Kunste zur Text (Algorithmiques). Digital somehow.
- Antoine Schmitt also is in the Fmac booth, with The Black Pixel. But not pleasnatly visbile, in spite of a powerful projector, in a brightly lit environment. But the Fmac curators could not do better in the space allowed.

Slick
The website. The most digital work is once more presented by Antoine Schmitt, this time cooperating with a sculptor, Patrice Belin. At first sight, we tended to think that Schmitt had found the easy way to create new woks with little effort : just project his Black Pixels program on any object, with minimal adaptations to the story. But as explained me Patrice Belin, everything in the work has been discussed, designed and worked out cooperatively. Bertrand Flachot is more "Photoshop art", but with a sophisticated mix of photography (mainly trees, vegetals) and digital handwork, intertwined to the point where nature and artefact are fully integrated.

Art Elysées - The Website.
- Miguel Chevalier explores a new field with jewels generated by 3D printing (at Galerie Esther de Beauce). The technology gives light objects light, but nevertheless robust enough to be donned as brooches or collar.
- Milène Guermont shows a concrete panel with embedded LED's. Using magnetic field sensors, the work reacts when the spectator touchs the concrete, at the same time emitting sound. Milène will not give more details about the software and hardware she uses. She is a fan of concrete, not of computers.
- Alain Le Boucher, on Murdoch stand, shows some new works, in the line of his strict exigence of showing anything. His recent great cubic work may shown at Acabas Gallery (Boulevard Beaumarchais).