The Second Life of Kinetic art

An addition on may/3 : In Paris Art, 4/19/2013, André Rouillé has brought (in French) another light on this spring "kinetic tornado. He looks at it from a political standpoint : he waves at the optimisme of an exposition like Dynamo, but notes the regression from the 1960's ambitions, and the absorption of kinetic art in the consumer society.

No doubt, when you enter the Le Parc show in Paris Palais de Tokyo (exposition from , the way you have to find your way through a forest of hanged mirrors won't let you indifferent. Le Parc played with maestria with mirrors and motors, plastic sheet and sometimes film loops. But, rather rapidly, the critic tends to think that the box of tricks is not so vast and that the results bear no particular meaning beyond a repetitive kind of entertainment. The public's behavior (on a sunny sunday afternoon, I must say) expresses the same feeling, and the (rather cruel, for sure) criterion of "time of attention" is rather conclusive : the visitors do not stay five seconds, give or take, in front ot the works. When they stay longer, it is to take a picture with their camera or, in some of the works, to let the children play with the mobile hangings.

Then, like 35 years ago when the Agam's fountain was installed in La Défense esplanade, the impresskion is more a gimmick than a brand new (at that time) kind of art. Why ? The limited "substance", should I say. So beautiful be they, these works show nearly instantly their principlen, to the point that even a layman or a child can think : "I could do it". That is quite the case with all the cinetic art. It moves, certainly, but never beyond a free suspension opened (like with Calder) to the wind or touching by the spectator, or beyond two or three motors in the test cases, The cyclic movement quickly comes back to its starting point and the spectator, like one of the characters in Elsa Triolet's novel L'âme (Gallimard, 1963, not translated in Englis as far we knwo), is more or less bitterly disappoBinted.

Sophisticated combinations of mechanics and optics, but minimalist interaction affordances.

Le Parc and Morellet found another kind of "movement" with litghts, with a particular love for stroboscopic effects. Le Parc, we must say, makes lush effects seep out of combinations of motors and mirrors. Nearly enough to tell a story.

Some artists went a little farther. Tinguely went for complex mechanisms, but also with a short cycle (rarely more than one minute, the longest bone being perhaps those of the hydraulic sculptures he designed with Nikki de Saint-Phalle for the pool near Centre Pompidon in Paris).

And finally, the kinetic art reached its end, give or take with the end of the GRAV (Groupe de recherche d'art visuel), in 1968, some 30 years after the Rotative Plaque de Verre by Marcel Duchamp. It was far from having pushed the artistic potential of mechanical/electrical movement. The wathmackers, in nearly 500 years from the Middle-Ages, had made miracles, with the "astromical" clocks and the automata of Vaucanson and Jacquet-Droze. They are still making a lot of money with the splendid wristwatches that are considered by many as a mark of success. But that is not considered as art. No more are the indusrial automata and robots (until perhaps the Japanese humanoid models of our century).

It looks like, somehow, the rise of electonics dried out the electro-mechanic artistic field, with for insance Moholy-Nagy and Schoeffer. And electronics led to computers, digital art and to day generative art. The comptuer opened the way to much higher complexity. Programming made it affordable as well as trendy.

Another point where cinetic art fell short of expectations and its own intentions : interaction. The search for a new and active spectator, a "spectactor" has been heralded for long, and could have found theoretical and technical resources in cybernetics. But, with Le Parc as with the other cinetic artists, interactions remains always strictly limited, generally to some buttons or, in mobile and passive works like the series of hanging objects, to some physical interaction with limited effects.

Interaction, in fact, does not appeal to the artists in the classical French meaning. They are mainly self centered, searching the Holy Grail of genius in the depths of their mind and heart. It's frome there that they feeel responsible to mankind, with a fundamental duty of communicating their message. Then interaction with the audience must remain under the control of the author. Even the most advanced among generative artists (we shall not give names) tend to consider the public reactions as a part of their work, and then to instrument them. Half a century after the 60's and the grand egalitarian and participatory proclamations of post-modernism, "true artists" consider coaxing their public as a form or prostitution or (everybody has to earn his living) an acceptation of commercial constraints.

Then, it is not the artists who have taken advantage of the electronics capacity to afford interaction. It is the world of games. And this word, whatever the beauty of its interfaces, the emotional engagement of its gameplay and the political momentum of its contents, this world of games is not considered art... even if hundreds of "artists" are clustered in cubiculums to produce them. By the way, another big benificiary of electronics, the cinema, is by its mere nature the less permeable media to interaction. In cinema, all the spectators can do is to remain silently seated. They can drink sodas and eat chips, but they cannot even clap at the end. 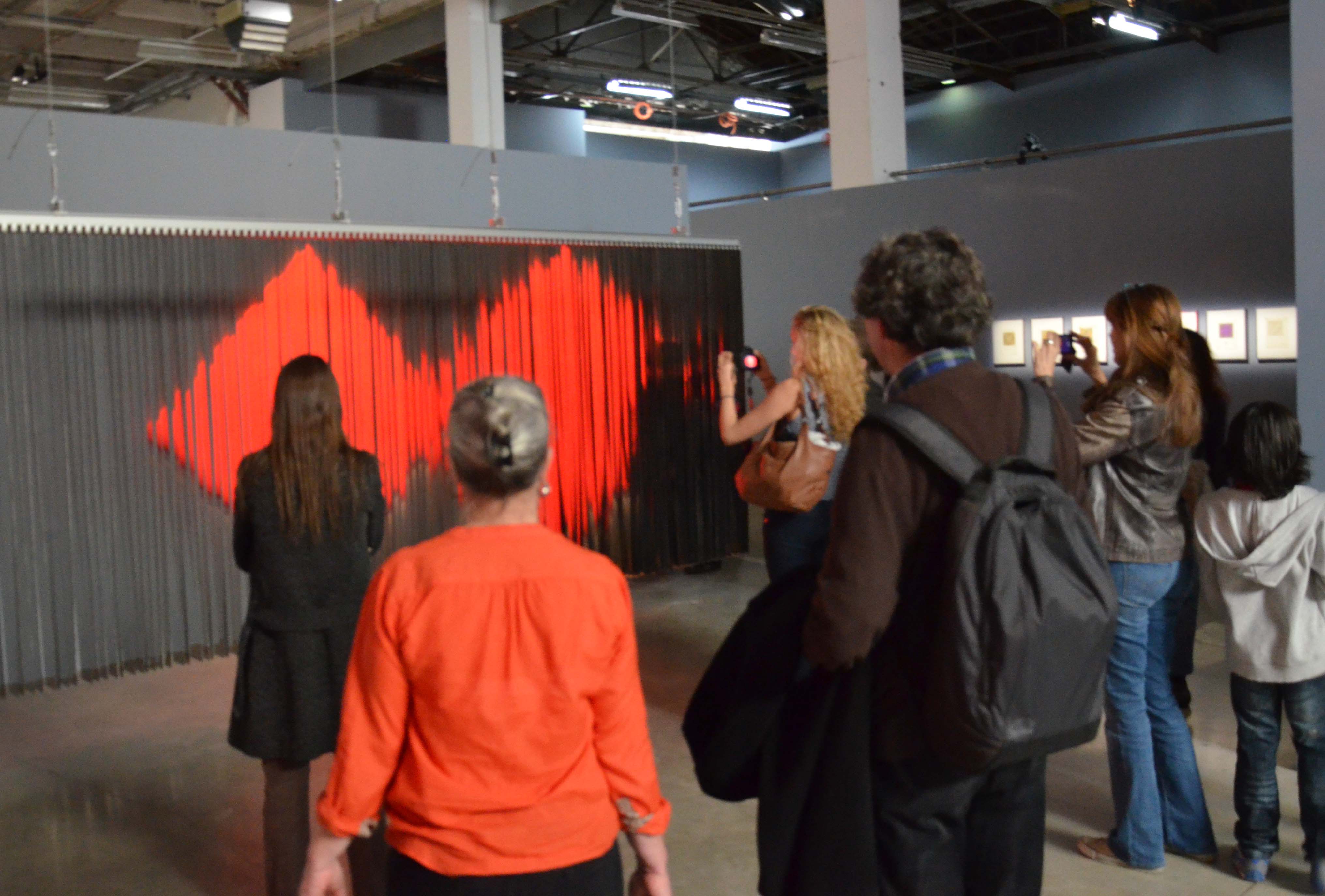 Most visitors take pictures... and by the grace of transmedia, cinetic art springs into another life.

But something happened that Le Parc and le GRAV could not foresee : the transmedia (we use here the word in a extended meaning) and the generalized use of "second screens" and more generally of individual and portable information and communication tools. There was a time when museums restricted quite strongly the use of cameras, specially when used with flashlights. But these lightrousrces are no longer necessary, even in weakly lighted environments, due to the sensibility of today sensors. Then, in a show hall like Palais de Tokyo, many if not all visitors bring capture devices and go home with dozens of shots, taken with anything from a smartphone to a semi-professional reflex camera. These pictures, for the most part, will be disposed of or forgotten in the depths of some hard disk. But many will be re-injected in mails tweets, blogs, websites and social networks. We live, as says the title of the new book of Jenkins [Jenkins 2013] in the world of "spreadable media". In other words, any work of art, be it text, painting, sculpture, video or even live performance, is re-used and remixed into other works (... like the website you are reading just now). As you could expect, and as Jenkins elaborates in long pages (he reads a lot and meets many people), that raises a lot of issues. The artist want to control, the publisher or producter wants profits... But art works, from now on, live several lifes. And so good for art in general and for importants monuments as cinetic art and Le Parc masterpieces.

P.S. A lot of cinetic art is presently in show at Villa Empain (Brussels). See our news about the Belgian digital spring.