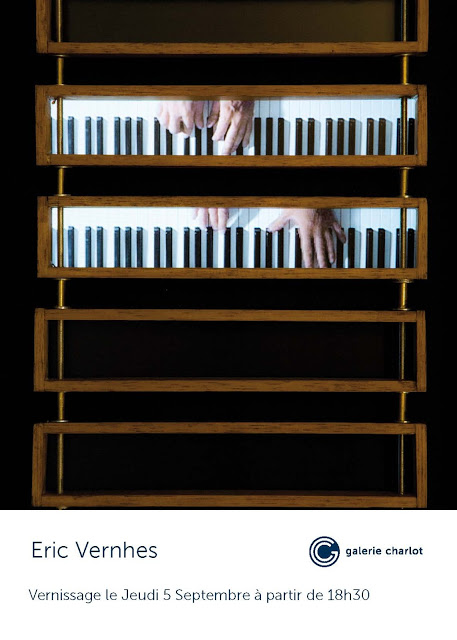 The Interpreter. Detail showing how a clever design can get multiple/correlated images from a single screen.

Opening at Galerie Charlot on September 4, and up to October 12.

Hosting Eric Vernhes as its first artist for the social year 2013-2014, Galerie Charlot steps up to a new level of complexity in conception The main works of Vernhes combine several devices (screen, projector, assemblies of wires and electronic components, including LED's, speakers and sensors) into interactive audio-visual systems telling and showing stories. You can find a presentation of the works in the artist's journal.

The first impression comes from the material aesthetics of the works. A certified architect, Vernhes knows how to build elegant structures. He uses frequently wood panels and black metal square rods to bring the material skeleton and skin to more delicate or ancillary devices. Included, or presented separately, the electronic parts play the transparency bet, a little like Le Boucher, but with a wider variety of components and some kind of humor even in their mere relative places. Discrete components are cut and soldered with an utmost precision, a sort of jewelry.

A second impression, surprising in such an avant-garde gallery, is a slight feeling of déjà-vu. And, in fact, a work like GPS#3 evokes strongly the compositions of Wassily Kaninsky in the 1920's. And this sort of Bauhaus aesthetics shows its mark in the whole oeuvre and in the artist's discourse. For instance in its use of vintage erotic postcards (commented with humor in poetry and drawing). Or in the rather strong technophobia in a masterpiece as The Interpreter, recalling Fritz Lang's Metropolis or Dr Mabuse. Anyway, in this work in particular, Vernhes remixes or remasters black and white image of this time, taking - as they did on this period - all the necessary time and repetitions to give the message its full thrust.

Deeper still, Vernhes searches intensely for a tight correlation of images and sound. He notes that, in many films or video works use sound as just a complement of images, or the reverse. But how to go further in the weaving? Wagner is famed for his combination of speech and leitmotiv in his characters. Fishinger, inspiring some parts of Disney's Fantasia visualized directly the sound waves. Vernhes does it at the montage level. Here, he is neighbor (or disciple?) to Eisenstein. For the Russian author, montage is the core of cinema as art. And at this level : "... one must develop in oneself a new sense: the capacity of reducing visual and aural perception to a common denominator".

But enough for these roots digging in the past. Vernhes builds state-of-the-art sophisticated combinations of electronic and digital techniques. Sure, he does not pretend to do properly generative art, nor complex interactions with the public. But some parts of his works can compete with Antoine Schmitt's pixels, and GPS#3 makes fine use of the spectator's location.

Eric Vernhes may be an architect and a computer geek, but he certainly aims higher, to a subtle, not very optimistic but nevertheless positive, complicity with his spectators. The final touch is given by the soft, but authoritative feminine speech emerging from the "GPS", which is not the satellite system you use in your car, but a sort of secret intimate consultant. Perhaps just what we want to face the 2020"s?