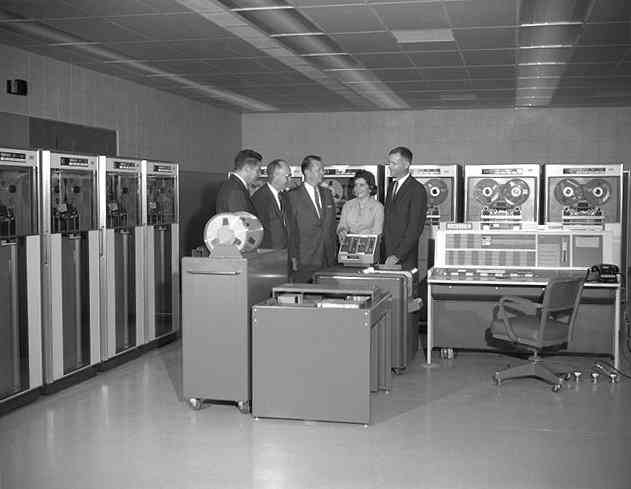 Xenakis in one large computing room of IBM, by the 1960's

Experiments with electronics and computers

The digital context. Index of artists having begun to produce digital works in the 1960 's.

For the plastic arts in this period , a major reference here is Nick Lambert PhD thesis (on line).

It's at the same time:
- the triumph of modernism: modern mathematics, wider distribution of computer (in large firms)
- the shift to post-modernism ("the sixties")

New ideas will feed a new age of ideas as of art. Let's not here discuss the new forms of philosophy, religion or politics. On the other hand, science brings interesting new affordances : supple materials, biological and neurological models to imitate, and even new mathematics, like the fractals by Mandelbrot or the catastrophes by René Thom. 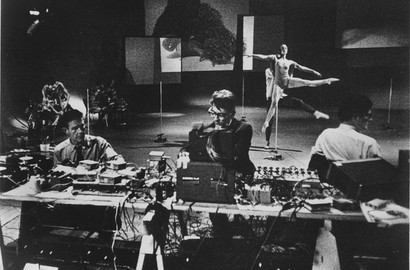 The most striking fact is the multiplication of computer arts events, press and public support. And the leading role of Europe (not so much of France, where the take-off will come in the next decade). Completely forgotten today (2013), an important surge happens in Yugoslavia, as told in La notion de "programme" dans l'art des années 1960 - art concret, art par ordinateur et art conceptuel. 14 pages signed by Darko Fritz in [Lartigaud]. This book contains several references to artists rather unknown on their time and forgotten in the 21th century (such as Milojevic or Bonacic) and also some links on websites dealing with this period.

1961. A centralized network is implemented in Zagreb (Croatia) "in order to present the plurality of the artistic stage on this domain. (see Darko Fritz)
1962. The first computer art competition is sponsored by Computers and Animation
1962. Nasa Art Program is established. Artists, including Norman Rockwell and Robert Rauschenberg are enlisted to present the history of space exploration from their perspective. (Indicated by [Debatty])
1965. The first computer art exhibition takes place at Technische Hochschule in Stuttgart (Indicated by [Debatty]).
1965. The first US computer art exhibition takes place at Howard Wise Gallery in NY
1966. Kenneth Knowlton and Leon Harmon, working at Bell Labs, produce one of the first ASCII art works "Studies in perception".
1966. A major event: Nine evenings by Bill Klüver and the Bell Labs, in New-York. Impressive in spite a very disappointing show due to technology shortcomings.
1967. EAT, see Nick Lambert.
1967. The Art and Technology program at Lacma is founded, pairing contemporary artists with high-tech corporations (Indicated by [Debatty])
1968. The UK's Computer Arts Society (CAS) is founded by John Lansdown at the Royal College of Art. Organise the Event One computer art exhibition, Cybernetic Serendipity. 12 pages and pictures in [Dreher].
1968. Light and environment exposition in Kobe (Sogo stores).
1968. Universal exposition in Japan. "... many of these realizations, using electronics and computers, included multiprojection... As for computer art and computer graphics, their presence was minimal at the Expo. They would have to wait for the International scientific exhibition of Tsukuba, in 1985, to be afforded an important place". [Bonnefoy] p. 391.
1968. Leonardo Journal is launched.
1968. The Computer Arts Society is formed as branch of the British Computer Society by John Lansdown and Alan Sutcliffe
1968. Computer art puglications in Europe: Bit International (Zagreb) and Page (London)
1968. Ant Farm, by Chip Lord and Doug Michels (Indicated by [Debatty])
1968. The ACM Siggraph is formed.
1969. The first doctoral dissertation on computer art is submitted at the University of Stuttgart.

Some artists (in France: Xenakis, Barbaud, Vasarely) manage to get some access to the heavy and costly computers, since the computer manufacturers see there a form of public relations, specially important since public opinion has mixed feelings (they have read Orwell's Nineteen eighty-four !). But analog electronics still plays a major part, notably in music. 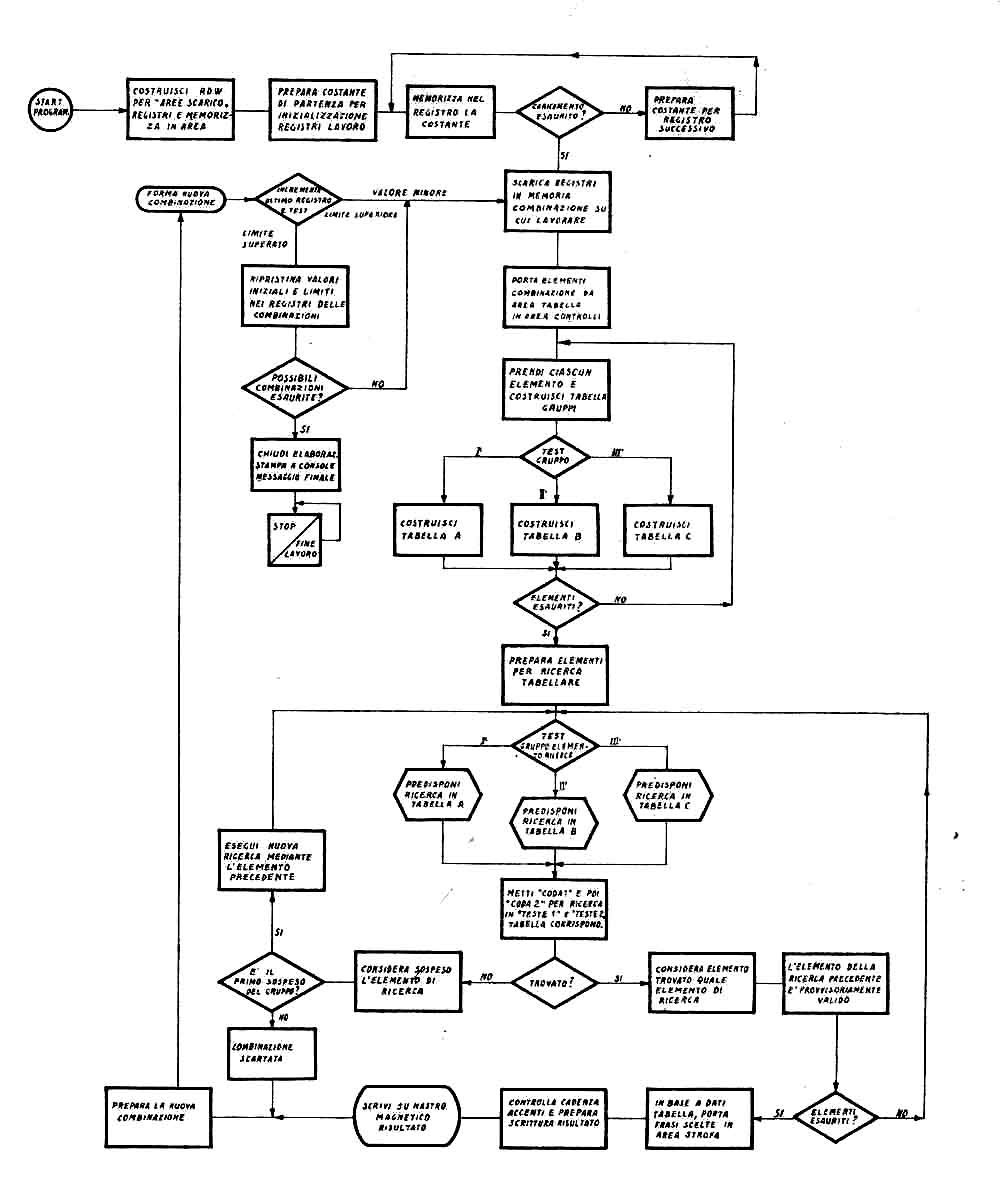 We can, for short, distinguish two kinds of digital (or electronic at least) musicians in this periods: researchers (focusing on technology and experimentation) and composers (using new technologies to find new publics).

Among the experimenters, John Cage dominates the scene, with a lot of different propositions and a large public.

E. Leipp in his book . Acoustique et musique. (Masson 1971) draws a review of the technologies of this time, mainly those of the instruments. He dedicates 16 pages to the "experimental music". His lines bear irony about new mechanical instruments ("Periodically, someone rediscovers the Franklin's 'harmonica or the glass bars organ of Chladini" (which dates more than a century back)). He is skeptical also about electronic instruments (like will be Xenakis himself, ten years later. He is alone (as far as we know) to quote the Trautonium of Dr Trautwein (1929). Leipp talks also about computer music, but concludes "The task of the computer musician appears long and difficult". He adds "A class of experimental music, where the music student would not be taught a specific doctrine, but informed about all what is being done, especially in the digital domain, seems us an absolute necessity in the main music schools". 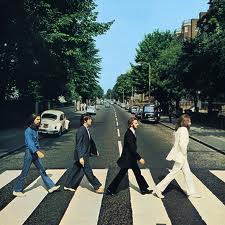 The Beatles. Abbey road was a technically advanced studio.

As for the composers and performers, let's quote The-Beatles , Gyorgy Ligeti Gyorgy and Tony Riley.
Terry Noel in 1965 and Francis Grasso, in 1969, are the first DJs who use a mixing desk tocreate a new form a music style. [Leloup, 2013], p. 38.


References
About music during 20th century, and particularly this period.
- [Ross], mainly for savant music during the whole century,
- [Moorefield] for popular music, mostly on the second part or the century
- [Leloup] for popular music and the new media at the end of the century.
- Acoustique et musique by E. Leipp's (Masson, 1970), lists many publications by the GAM.
- About the transition from the 50's to the 60's, see [Spector] and, more generally, [Moorefield].

Technically, computer "painting" in his period can use two kinds of devices :
- the computer printer, son of the tabulator; it prints only alphanumeric symbols in black on white (it would be more honest to say : gray and white), but th differences of density between a W and a simple point can suffice, at some distance, to get graphic effects;
- the plotter, at this time a pen guided on a plane surface (the term will later be used for large matrix printers),
(Note that, at the moment, screens are rare, expensive and poorly giftec for art. Photograpy is still out of the computer range). 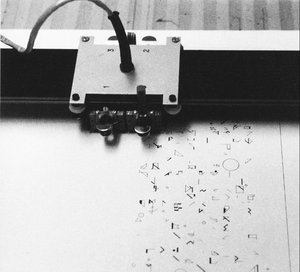 Plotter used for demonstration by Manfred Mohr, from the Ex Chamber website.

Some of them will keep working very long, sometimes even today (2013). For instance Manfred Mohr (inspired by Bense aesthetics) or Vera Molnar Vera. Auguste Herbin develops a p lastic alphabet, by combination of geometrical forms. Thomas Bayrle : "Originally relying on simple pictograms for his compositions, in the 1960's he began to condense together the prefabricated parts that construct what can be called superimages". [Popper 2] (p. 101). John Whitney is mainly known as a film maker.

In Japan, computer art by the CTG group, with Tsuchita Haruki and Komura Masao.

But painting is also influenced by the post-modern ideas of the sixties. They are core to the artists who cooperate, from 1960 to 1968, in the GRAV (Groupe de recherche d'art visuel): François Morellet (lights), Horacio-Garcia Rossi (research on color and light), Julio Le Parc (kinetic art), Francisco Sobrino, Joël Stein, Jean-Pierre Yraval. In 1969. Popper and Jean Laude found the Plastic Arts department at University of Vincennes. Ambient notes in [Popper 1] p.32-33. In this line, Edmond Couchot and Marie-Hélène Tramus begin to work, combining painting and kinetic. They will use video, computing and interaction when it will become available. This movement is still active (2013) in the various art departments of University Paris 8, in Saint-Denis, where Vincennes university was transferred.

An image from the film A Computer Technique for the Production of Animated Movies" (1963-64). From the IEEEghn website.

Less properly digital, but inspired by the computer or the pragmatic mood:
- Mel Bochnert experiments mainly from photographs but using different kinds of montages,
- Leon Harmon's sophisticated mountings with Ken Kwnolton,
- Jeremy Gardinet uses the computer as preparation, then finishes in acrylics,
- Roman Opalka practices an extreme and minimalist form of algorithm: each and every day, he writes his name on a new canvas.
- Charles Csuri builds an analog computer. 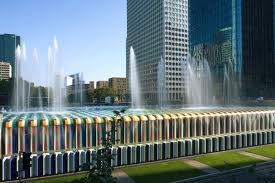 Yaacov Agam is famed for his fountains, driven by electronic systems, but probably not digital.
On the limits of our domain, the BMPT group (Buren, Mosset, Parmentier) may be considered digital by their systematic repetition of patterns.
Sol Lewitt's sculptures are digital in their concept, but classical in their realization.
Robert Smithson does quite formal constructs. Not properly digital.
Enzo Mari applies "programming" methods and modular elements to design.
Tony Pritchett makes the first computer animation in the UK, Flexipede.

Frank Popper meets "young artist ... Malina, Schöffer and Agam, who were working with movement and light". In 1966 Eindhoven (Nethelands) host the Kunst Licht Kunst show with Malina, Schöffer, Agam and the Grav [Popper 1]. In 1967, creation of the CAVS in MIT. Most of this work cannot be said digital, but prepare the future. 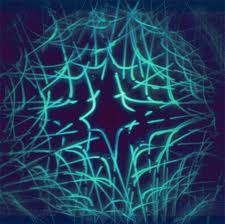 Here, this decade, it is mainly a continuation of the precedent one and Frank Popper leads the show. In 1967, he publishes Naissance de l'art cinétique and organizes Lumière et mouvement, a show at Musée d'art moderne de la Ville de Paris [Popper 1] p. 20-22. In 1968, he curates Cinétisme, spectacle, environnement at Grenoble's Maison de la culture.

Note some works by Grazia Varisco and Gabriele Vecchi.

We have only start points, with Coop_Himmelb(lau) (They will be more digital afterwards) and Arata Isozaki. John Lansdown " made perspective drawings in 1963, modeled a building's elevators, plotted the annual fall of daylight across its site" ( [Masson]).

Some attempts at interaction in theater are due to Guy Kayat (Oedipe roi, 1969), and Georges Perec (L'augmentation, 1970). But it is too early. Technology is poor (punched cards and a slow terminal for Perec), and the public not really interested.

Not properly artistic, but a landmark in artificial intelligence, Eliza (1960's) by Joseph Weisenbaum is the first attempt of digital dialogue with text generation using a computer. See substantial presentation [Wardrip-Fruin, 2009].

In 1961, the first video game, Spacewar! is developed by Steve Russell at MIT for the PDP1 computer. In 1962, the first computer art is sponsored by Computers and Animation.