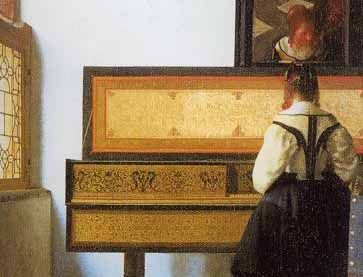 Literary text, a surprising feat, surrounds the formal expression in order to foster scientific progress and its knowledge by cultivated audience : in 1610, Kepler writes Somnium in order to show the importance of copernician revolution [Aït-Touati, 2011]. 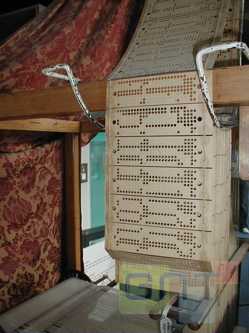 Digital fabric art, with the Jacquard loom. (from a tutorial by Génération-NT)

The industrialization of printing gives more importance to the intellectual property issue. Since Antiquity, the authors had no right on the copies. That begins to change with the Statute of Anne (1709)/

The well-tempered clavier harspichord of Bach is emblematic of a mathematization of musical composition.
Music will also use theoretical instruments, developed with Rameau, for instance.
The score, written by the author, overrides the personal ornaments by the divas.
Organs reach monumental dimensions, demanding important man-machine interfaces... and virtuosi able to control so complex systems. (A similar evolution in observed in theater, see below).

Random techniques supplement the algorithmic set of rules. In 1787, Mozart creates music with dice throws. An anonymous text of this period describes his method, where minuets written by Mozart are found. We are not sure, today, that Mozart be the author of this method. See the website Mathforum. 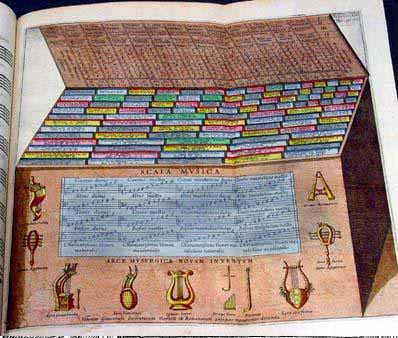 The compositing "machine" of Athanasius Kircher

Athanasius Kircher builds an automatic device to compose music, by drawing some themara and parameters written on slides grouped in a box (see figure). Jim Bumgardner  has implemented simulation in Perl. It is only one of the many machines Kircher designed. But these inventions were mainly done to entertain the princes and to magnify the scientific reputation of Jesuits.

Jean-Jacques Rousseau proposes a digital scoring of music, but is rejected.

Read: Between a Bach and a bard place : productive constraints in early computer arts. par Douglas Kanh. 29 pages in [Grau]

Automata expansion may be seen as a first period of "kinetic art", with the works of Vaucanson and Jaquet-Droz.

The Jacquard loom (Wikipedia) and its punched cards is explicitly digital. It has always been considered as craftsmanship or industry and not art. It would not have been impossible, though time consuming, to do art proper using these type of system. A digitized version has been shown in the 1990's, which produced fabrics from photographs, for instance visitors in an exposition. It was still more craftsmanship than art properly.

Ancestors of cinema emerge with the magic lantern by Johann Schröpfer, in Leipzig (1760). Kircher contributes to this field. Castel Louis-Bertrand designed, and perhaps realized, a light organ.

Read : Remember the phantasmagoria! illusion. Politics of the Eighteenth century and its multimedia afterlife. by Oliver Grau. 25 pages in [Grau] 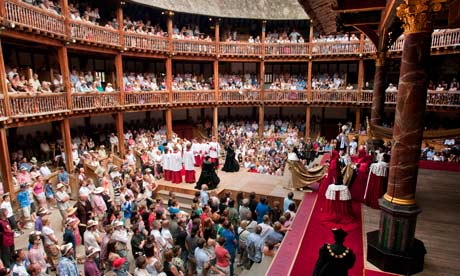 Shakespeare theater in London. From the spontaneity of actors to the structured will of the author.

Theater pushes its structures far beyond those of the Italian comedians. Shakespeare leads the way here : the text he writes becomes the spinal column of the show. Its no longer a simple guide for the mainly improvised paly of actors and specially of the jester. （1599. A year on the life of William Shakespeare. by James Shapiro. Faber & Faber, London, 2005).
Unfair copies of his works open the issue of intellectual property.