Beauty (ort art) is sometimes defined as the creation of an "unpublished resonance". We deal elsewhere about originality (unpublished). Let's see here how resonance can be modeled and, at least potentially, be used in digital art evaluation and critic.

- it takes us beyond a purely internal analysis of a work and its complexity, up to an appreciation of its relationship with something else,  which could be the spectator ; here, the work becomes the energy-loaded frequency which renders the resonator active;
- there are full quantitative and mathematical expression of the resonance concept, which is shown as a peaked curve, ; and the peak is more or less flattened, which corresponds better to our intuitive idea a an interval of good values and not just a point with supposedly exact x value.

Basically (see Wikipedia [35]) , resonance is driven according to a formula of the form: a/ ((d ** 2) + c), where a is a scaling parameter, d is the difference between two frequencies : the external energy source and the resonator's specific frequency.  And c a damping factor. When c is large, the peak is flattened (the resonator is lazy, but responds to a wide range of moving energies). When c is small, the peak is pointed (the resonator is sensitive only to frequencies similar to its own, but then can accumulate energy. In the limited case where c is null, the peak would reach infinity. 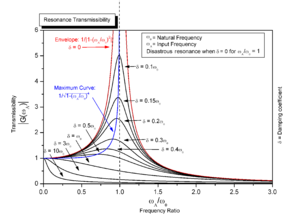 The resonance curve, according to wikipedia.

can be interpreted as a distance. This is a  promising term. Just looking into Bres [36], we find ten types of distances for image processing!

So we could extend the model to any metric space:
- modeling audience tastes according to several parameters
- combining it with recognition (see below, meaning) using the classical method of recognition by minimal distance in a feature space.

There is also a correlation with the psychological concept of cognitive dissonance.

The damping factor also gives hope. It can be any meaningful number, and may related to noise, and hence to the medieval critewria of clarity and integrity.