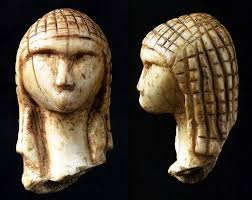 See the 2017 symposium at BNF and INHA Paris: formal description as a factor for perennity.

Perenniality is a serious obstacle to the success of digital art, in particular on the collector's market.

Perenniality has two bases:
- material stability in time and resilience to wear and tear as well as pure destruction;
- multiple copies of the same information, this brings protection against destruction (very probably not all the copies will be destroyed) and wear and tear, provided that copies are regularly done; on this point, digital technologies are stongly better.

In fact, no preservation system is totally safe. Even giant stone statues can be destroyed by nature (the Collossus of Rhodes) or by man (the Afghan buddhas).

We can try a survey of the different information supports, from the most material to the most immaterial.

Sand, wax ... and wind is emblematic of ephemeral expression of writing/speaking.

Stone sculpture and engraving is reputedly the strongest media, with remains from the oldest antiquity (Brassempouy Madonna). The informational capacity is quite low (several hundreds of characters..).
It can be destroyed by nature (earthquakes, invasion by vegetals...) or by man (re-use of the stone, or voluntary destruction, for economic religious reasons). 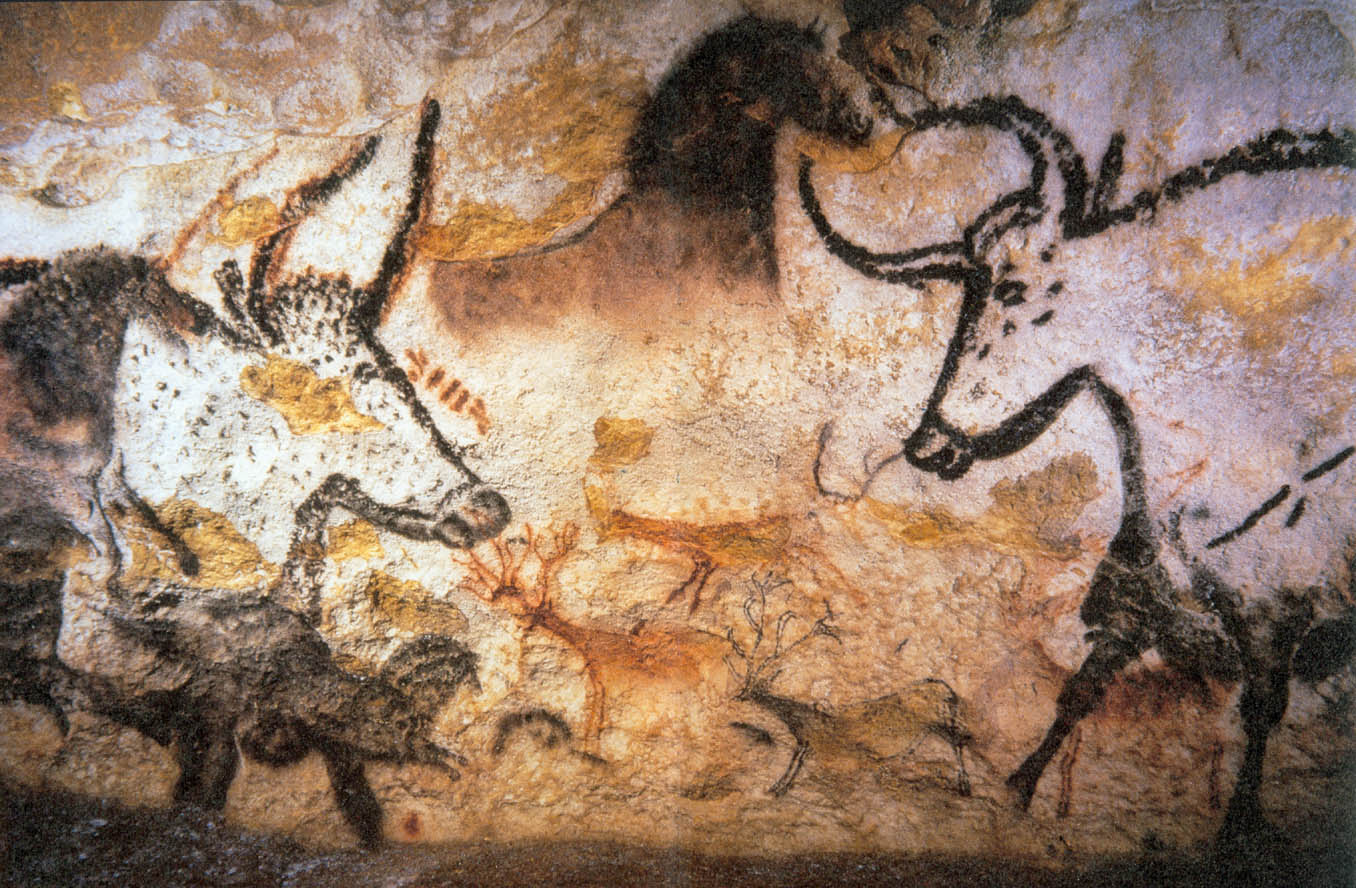 It will be difficult to do better, on perenniality, than the paleolithic cave paintings (here, Lascaux)... even if they must today be protected against human-generated pollution.

Stone painting/drawing pares as well if not better than sculpture, for instance in the prehistoric caves. The informational capacity could perhaps be higher than stone, with small fonts writing.
It can be destroyed by the same causes as stone, and much more frequently by wear and tear, dissolution by rains, etc. We have a very small part of antique paintings, saved for us by particular protections (caves) or material coverage (Pompei).

Papyrus has been of extensive use in Antiquity. Very few documents reached us. Parchment resists better. Information quantities can be high, with several thousands of characters on one page, and the possibility of large collections.
They can be destroyed by fire or flood... and by man (Byzantines libraries burned by Christian and Muslim leaders). 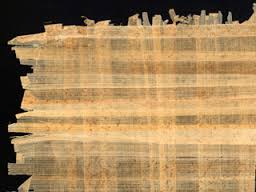 Papyrus. Probably one of the most important mass of lost antique documents

Paper replaced papyrus and parchment, and has been the main information support for centuries, with major progress in the 19th century in quantity (not always in quality). Good paper properly curated can last indefinitely, as far as we know.
It can be destroyed by natural and human causes. For instance, in 1871, Paris Towh Hall was arsoned, and centuries of family documetonts ("état civil") went out in smoke. Printing brings new hopes for long term survival of the content.
Printing allowed copies with low error risk.

Punched paper (cards and tapes) appeared at the end of the 19th century and playes a major role up to the 1970's. The information density was comparatively small (80 characters on one punched card, typically), and they are today curated only in some computer museums (see museums) or personal archives. Punched cards, when their content is printed along one side ("interpreted") can be read directly. But, in the general case, the low capacity demanded codification, and you cannot understand the content if you lack it. A fortiori for program cards, with were still in use in the 1980's.

Chemical memories (photography, microfilm), properly curated, can last indefinitely. A lot of us has pictures of grand parents dating back to the diffusion of photography in the 1880's. Microsupports demand appropriate readers. They are subject to the same causes of destruction that paper supports. But the possibility of quality copies gives them better hopes of survival.

Magnetic supports emerged in the 1950's and are still the major storage resource. Informational capacities reached rapidly some million characters (on disk) and nearly a billion (arount 700 millions) on large tapes, which required expensive units to be operated. These supports have also be used for analog data (sound and video). There are multiple types and formats, each requiring and ad hoc hardware to be read. And sofware it the content is not limite to raw data.

They naturally tend to become unreadable after some years. But, due to the very high reliability of digital copying, data can be kept operational indefinitely. (Personally, my website contains files that date back to 1985, with successive tranfers from diskettes to disks on a long series of computers. But a lot of persons dit'nt take care, and can no longer reak their old diskettes or cassettes. (Here also, see museums)

Copies, possibly done constantly with mirroring, ensure also the protection of data and program against physical destruction. Some days after the 9/11, a French bank represntative told me : "It's a little embarassing to say that: we have lost 150 persons but no one bit of data".

Then the major problem, for materially curated supports, arises from the hardware formats and even more from the sofware evolution, be it the operating system (successive versions of Windows, etc.) or the application software itself and its documentation.

CD-Roms (and probably Bluray) is the worst exampe of all. Not only does the documents become generally unreadable after some 10-20 years (but for special security versions on metal or glass), but many of them work exclusively with specific applications or operational systems.

Let's conclude with biological memory, the most astonishing case, and probably promised to a bright future.

On the one hand, its ephemeral, being limited to the life of an individual, very short for primitive ones, only a few seconds for certain bacteria... unless the individual lets traces, which then can last on durations comparable to writing on stone.

On the other hand, the DNA code has reproduced itself on Earth for some billion of years, and with a reliability high enough to let think that all life on Earth come from a unique strain.

Digital art:
- adds a new problem to art curating: many of its work cannot be seen without hardware and software devices that are not only fragile but also frequently obsolescent (CD-Roms give a parlicularly regrettable example of practical death of major works of art, due less to the material fragility of the support, than to the evoluion of visualization software and operating systems.).
- brings new possibilities of preservations since its files can be duplicated and distributed in large numbers at low cost and without perceptible loss.

The problems are quite different according to the different forms of art. A typical feature of new media is to disregard perenniality in its traditional sense (painting, sculptor, music composer). What matters here are the events themselves, unique in time by nature. Note than even architecture more and more frequently hides its tectonics under temporary cloth coverings (Christo) or metal lace curtains (Ministry of Culture, near Palais Royal in Paris), or shows it under new lights with projection mapping and augmented reality.

But, even for the most temporary happenings, a form of perenniality is brought up by recording. In France, cultural perenniality is guaranteed by three public institutions: Ina for broadcast media, BNF for material publication, CST for films. As far as we know, no similar public system has been developed in other countries, but different institutions play an important preservation role, for instance the ZKM in Germany of the Victoria & Albert museum in UK, the Whitneyand Moma museums in the USA. But finally, this global responsibility is partly taken by private initiative such as Youtube, Dailymotion and of course Google.

In some case, perenniality and even remembrance are considered a nuisance. The work aims to a temporary use, a specific political effect, and as soon as recorded, enters in the capitalist realm (points of view of Tactical media, for instance).

Note: Perenniality is also a source of concern for diccan. Since we make a heavy use of links onto other websites, some of them close and make our links obsolete.