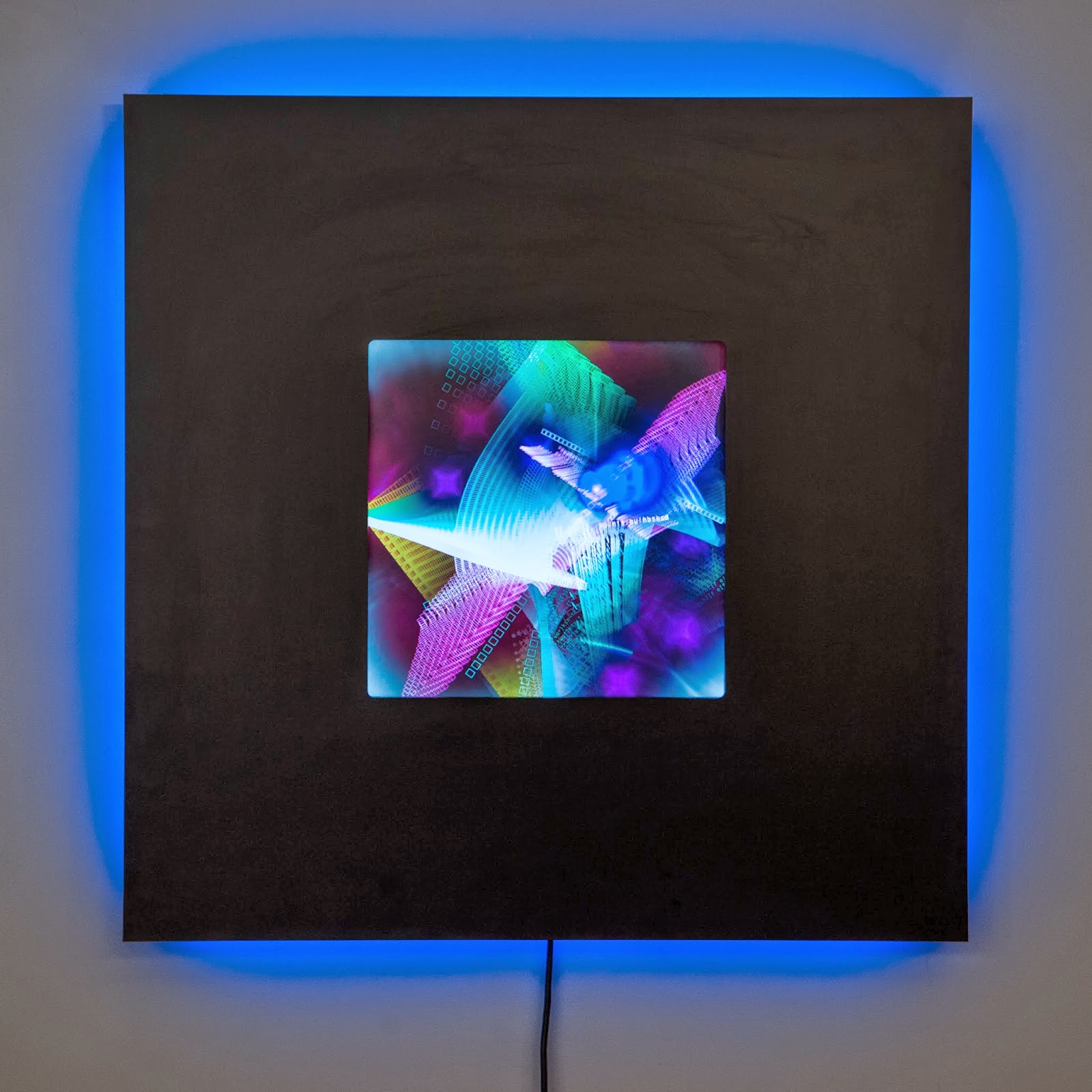 Eric Vernhes : Gerridae (2014). A complex generation of patterns and text, giving expression to a pond animated by water spiders.

Art Basel and Scope, this week in Basel, are in line with their 2013 sessions (see our post) , with not much of digital art, and nearly an exclusivity of French galleries.

Galerie Charlot, at Scope, is once more heading the digital art movement. They show some artists of their team: Antoine Schmitt, Jacques Perconte and Mickail Margolis. But the news is done by Eric Vernhes, with a new level of complexity in generative graphic art.

Gerridae, indeed, combines on one screen several types of graphic, giving expression to the global theme of gerridae (water spiders, see Wikipedia). These beings appear first as lines of square, with the now swith and now smooth moves on water, then transforming with random variations into lines of text, which at end of a cycle (around one minute), form a poem. The moves may generate trails. These forms are complete by circular wave effects, evoking water drops falling in the pond. The whole animation is colored, most of the time by fresh and acid tones, but sometimes warm and sweet ones. A minimal interaction is offered by a (hidden under the framing) field sensor on the base, which resets the animation when swept over.

Compared to the recent works of Vernhes (see our post), this work opts for material simplicity and little interaction, targeting a wider private market, when some precedent works were highly complex installations more adapted to public institutions.

Also at Scope, Licht Feld Gallery shows sets of video by Marck, some of which in the spirit of Unzi Kim.

At Art Basel, Denise René gallery, like last year, has the richest team of digital artists, some of them perhaps more kinetic than properly digital, with some new works.
- a mobile set of wires by EliasCrespin,
- Cruz-Diez (present also at The Mayor and Fanal galleries),
- Pe-Land, with #502, a cross combination of his rings vibrating on wires and #500, a matric of rotating discs
- Santiago Torres, #012, adding in sophisticated oves

Also at Art Basel, foreign to general classifications, Tabor Robak, plays somewhere between video, games and web art. His Analphabetic Aquarium , shown by Team Gallery (Art Basel) , is a group of four large screens, with a kind of video animation in HD, controlled bay a "custom software" and lasting one hour. (We shall try to get more data in the future). By itself, his website is teasing and typical of the contemporay art trend to destabilize the spectator.

On the borders of digital art, let's cite also Morellet (present in several galleries, like recently at Art Paris). In the same vein (but coming some 40 years later), Neon Rond by Michel François (2006) à Gevaue gallery. Not signalled at digital, but very certainly designed with computer use if not computer maching, Cyclic (2014), a large (around 2 meters in diameter and height) sculpture in fiberglass, by Mariko Mori at Sean Kelly galery

Let's conclude with an intriguing large work by Trevor Paglen Prototype for a non-functional satellite. (Design 4, Build 4). 2014, at Thomaz Zander gallery (in the "Unlimited" hall). A large balloon moves slowly in a sort of cage, controlled in some way by computers juste under. What to do for ?

In short, not more digital art than last year, but some really new things, and a constant: the perseverance of two French galleries on the digital art front.