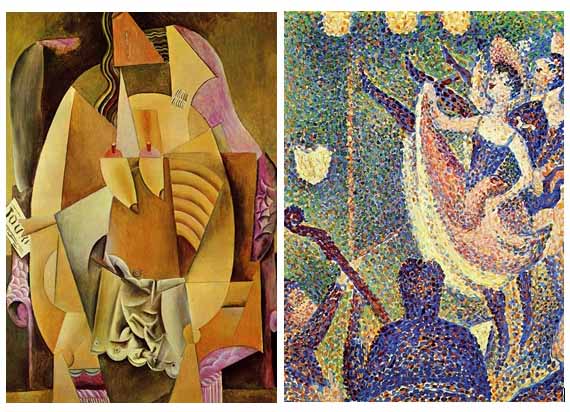 Cubism (Picasso) and pointillism (Seurat) were two extreme uses of fragmentation/assembly in painting, at the beginning of the 20th century.

Last revised 9/4/2014.Return to Major concepts. See digital, fractal, transmedia, database.
We work mainly here on an abstract presentation of the concept. For its development along centuries, see history.

1. Fragmentation , a facet of digitization
2. Fragmentation, whereup to?
3. Processing on each fragment, selection of fragments
4. Final expression
5. List of examples

1. A facet of digitization

There are three important levels in fragmentation:
- the bits, adequate for automata, with syntagma. And used by living organisms (DNA, neurons), in a way that is still largely unknown. Genotype-phenotype mapping, see Wikipedia.
- the quanta, limit of our observation of the real even through instruments
- the perceptible differences. We cannot use bits directly, but we can use them (create, store, read, transmit, apply operations

Fragmentation is done with the aim of some assembly.

- through machines
- through perceptible devices (switches) or representations (set of LEDs for instance).

Art deals only with perceptible differences, but uses bits for practical reasons. Quanta are beyond its scope. But nothing exists, in this World, if not materialized, then based on quanta.

We must make the distinction between what is internal (and basically digital) and what is external.

Connected: the fragmentation must allow the assembly.
But basically different, with liberty in the between

We can define four phases in the making of a work by fragmentation.
- The fragmentation properly speaking, i.e. the "cutting" of fragments in natural object (stones from a quarry) or from existing works (collages, )
- The operations applied to each fragment. i.e; polishing, coloring, describing, transport
- Assembly
- Final touch. Works on the borderlines (for instance small blurs aroud a figure selected with the magic wand.

At each level:
- the work done by and, more craftmanship or more artistic, with which rules, more or less complex or automated.

Every partition as its painful facet. There is a nostalgia of the unbroken paradise. And efforts to reach back the immediacy.

When the fragments result actually of the partition of one set, an assembly method can be to let them in place and to define an ad hoc route algorithm, from which they can be numbered (I think about jigsaw puzzles).

Digital objects are basically fragmented in bits. The global content may be parted materially: disc unit, track and sector, characters) but the limit is radical and simple.

Text and language give the best model.
Bits are replaced by alphabetical characters and compatible signs. And organized in words.
Any text, parted from its graphical of prosodical, can be reduced to bits without loss. 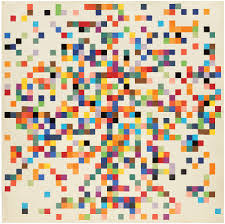 2. The fragmentation itself. Whereup to?

There are an infinity of cases, see Varia, and we will limit us here to those who are of interest for art.

Fragmentation as the input process. Memory as a storage, then processing to generate an output.
Food assimilation then action.

Generally, in art, the fragmentation goes no longer than the spectators percetpion. A little before for cheap markets (japanese "limited anime") or a little afger for high quality for sensitivie spectator (high definition sound, UHD 4K-8K video)..

You cannot go beyond the thresholds (of smallness, or enormity as well) without prostheses, auomata.
And training, drilling, virtuosity, is the construction of automata in oneself. So that "you no longer have to care about and can concentrate on higher levels

Levels in my schema.

when they are digital, they are by nature broken in bits. But the interesting operations are done at higher level, bit being generally hidden.

A natural corpus. Then, synthesis.
A corpus is a set of fragments, with similar characteristics which allow a coherent assembly.
May be a meaningful sample, or not.

All the texts about something, or by somebody.

A model of the user is also

- on/off swithces for any device
- change the place of a object
- Writing/printing, the cases
- breaking any object, sawing, etc.
- break the genome (for crossover)
- break dance
- cycle, iteration, cut

We can distinguish two cases:

a) The semantic load of the objec(s) you fragment is interesting.. Possibly from one work of art. What you want is to reach new effets, more "artistic" and original. For example, cuboism starts fom a scene and generates several semantic views than we consider fragments .

Here we have classificagtion and segmentation. Or pattern recognition. Object/background ( blue or green matte).

In cinema, a cut has its own meaning. Anyway, a cinema cut is yet an enormous set of bits!

b) You don't care about the semantic load of the objects you fragment. You deal with them only as materials for a new project.
Or the semantics is linked to texture, bringing no constraint on the cutting, as long as your cutting has no regular relationship to the texture itself. To avoid moire effects.

Aegyptian canon.
Jean Arp, Matisse (and all works with flat shades). You cut in a monochrome matter and get parts the forms you want.
- marquetery, Boulle furniture. You play on color, textures.
- weaving and tapestry. The components are the colored threads.

You cut in the living flesh.
Here you will find tessellation, broad pixelization, With the "random" effects of such a cutting.

- Arcimboldo composes with fruit and vegetable. Here also, two semantics foreign to each other
Medley music.

Me as a fragment for others. Directors. Or workers.
The Faust contract

Text, language. Fragmentation is done materially in graphics and sound.
Several levls of subsets: phonems/graphemes, then words taken in the dictionary, bringing a first level of meanhing. Then phrases in the text. Possilbly higher levels (Oulipo).

Photography as a cut. Cinema a set of cuts.

By the camera, cine. Automatic shooting for still images
Regular or random cutting (square, any tessellation pattern)
Then segmentation etc.

3. Processing on each fragment, selection of fragments

If the fragments are not material, you can adapt their scale. You can apply different filters to each of them. Change their light, tranparency, etc.

If the fragments are material, you can apply themsome finishing operations (polishing, dyeing).

In some cases, you can oblige yourself to use all the fragments, and without ovelapping. In this case, it is a pemutation inside the classes of fragments which have the same shape.
Arman explosion or violins.

More generally, you have a large stock of fragments and you select those you want.
Then you have an evaluation, a ranking of each fragment according to your needs

Aesthetic rules on selection, by the features of each fragment, but also (and more so) on the harmony/congruence on parts.

Filters, enhancements, harmonization with the other selected fragments.

Hence the development of standards, in order to have components that can be assembled.

An important feature of digital objects is that they can be copied without destroying the original. Then you have an infinite number of pieces in stock. Limited only in time by the access speed of the memory.

Mounting could be bone by the spectator, following heir guise: they would transform the film
But also automated mounting. Israel. Roxame /

Rodin taking models of its main sculptures for his Hell Gate

Parameters:
- location in the work
- rotation
You can also change radically the space: from paining to music, 2D to 3D.

Weaving, tapestry. The assembly strucure is given by the weft/warp creossing, like a pixelization.

A HTML page is
- a typographic assembly or text, defined by the standard browers (which adapt the assembly to the user's screen), plus the integration of other elements (images, sound, video). Completed by the CSS.

Case where the cutting gives directly a work. -
You take a film a sequence of frames as a volume, a 3D object, then you cut into it a 2D surface

- No operation, the fragments are let as they are
- Gradations, interpolations
- Borderline reinforcemnt.

Music: modulation on tonality
Painting and sculpture: join
Roxame allows a lot of such functions For instance generate a first image by random combination of forms. Reduce it to a segmentation, then in each region, call more or less randomly a texture (from ca catalog fo textures).
Cinema: cross fade
Video. Reassembly of mulitple-projector presentation (light compensation, correct stitchning at transitions, in order to get a totally coherent and seamless image).

The assembly let to the reader, spectator. Database.
Is it still a work of art, or a construction game, a toolbox.
The "magic" way of using the bible, by random selection of a verse.

Undigested elements.
Like all material objects are made with the same atoms. But are not for this fully assimilated.

Unless the image is abstract and can be considered only for its abstract properties. Mondrian ?

Compression/decompression algorithms use not strucures, but statistical properties;

No digital object is purely digital. Not only has it a material basis, which can always be defective, but the code itself keeps connexions with the original.

In a story, for instance, the scenario must be consistent about the succession of events, the behavior of characters. And the work must show a stylistic consistency.