Digital Creation in Asia and Oceania

Astroboy, a typical example or a kind robot always ready to help humanity.

French observers, even having lived in Japan for decades, do not pretend to understand this fascinating civilization. It's depicted by a lot of books. Many of them, like Arthur Koestler or Hermann von Keyserling, express contradictory feelings of love and hate. Japanese are at the same time free-minded and strongly socially formatted.

A particularly dense and informative texts is Device art : a new approach in understanding Japanese contemporary media art, by Machico Kusahara 29 pages in [Grau]. "Probably the most notable feature is a playful and positive attitude toward technology, rather than a negative and critical stance". (This was written in the early 2000's. Fukushima has perhaps changed that).

In sex matters, for instance, their open attitude contrasts with the prudish America, but falls nearly at the same time in sado-masochistic themes. That is both a result and a cause of a particularly dramatic history. Twice raped by the US marines, but unforgivably remorseless invaders. It is now stunned by Fukushima, a natural disaster in the tradition of the land, but amplified by nuclear breakdowns... 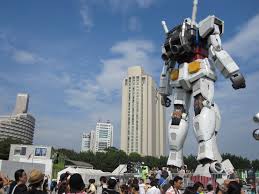 A gigantic model of Gundam peacefully dominated center Tokyo in the 2000"s.

Robots hold a very specific status in Japan. In nearly all other countries, robots fascinate but with a strong negative drive (see our notes about robots in art). Here they are mostly seen as friendly partners, as well in industry (for instance, in the Glory society, see an article in Challenges (5/24/2013, in French) as life companions, let alone sex partners. If the singularity is to happen anywhere, it will be in Japan since this country, at the same time, makes very few children and does not favor immigration. Then its population is ageing, and robots more and more necessary in production as well services to persons and entertainment.

At the end of 20th century, Japan made several attempts to challenge the US digital domination, for instance the Tron operating system, industrial production of software or artificial intelligence ("The 5th generation).

In digital arts, Japan is strongly present. Yoichiro Kawaguchi for instance, is nearly every year in Siggraph, with its warm smile and indefinite, frequently humorous, creativity. In Laval Virtual, Japanese student teams bring each year the core of the "emerging technologies" session. But less than 50 Japanese artists are listed by diccan.

Pet robots like the WRobot, for aged persons as well as for children.

- Index of Japanese artists presented in diccan.
- In the 80's, Nikograph show.

- Around Hiroki Azuma, a whole post-modern philosophy comments these new developments. One of his works has been translated in French Génération Otaku. Les enfants de la post-modernité. Hachette 2008 (Japanese original 2001)
- About Japanese animes and mangas, the Minnesota University ogranizes each year the Mechademia conference, and publishes its proceedings (Francis Lunning ed. ):
.1. Emerging worlds of anime and manga. 2006,
.2. Networks of desire. 2007,
.3. Limits of the human. 2008,
.4. War/Time. 2009.
To be published:
.5. Fanthropologies,
.6. User Enhancement,
.7. Lines of Sight. 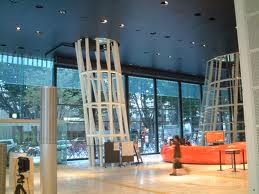 Singapore:
- Worldwide festival.
- Professional chapter of the ACM Siggraph (Siggraph Asia was held there in 2008 and 2012).