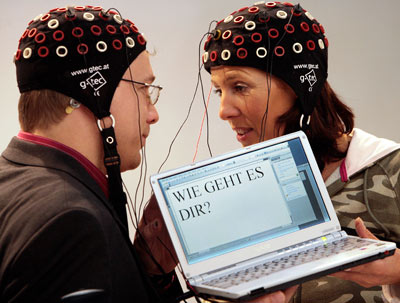 A humor example of brain-to-brain communication, on the One Penny Sheet website, where one of the participants asks the other one "How do you do?".

Direct communication from brain to computer, and then to other human brains is no longer science-fiction. For several years now, we can find devices, simplistic perhaps, at low prices, and free software. As far as we know, neither scientists nor philosophers, nor even science-fiction writers see interested in this issue. We don't find anything in literature, when humanoid robots have been told about since Antiquity. Who will dare to go on this topic.

Present experiences or realizations can be classified as follows.
1. Corporal intrusion degree.
- no corporal intrusion, nor even physical device; it is the domain of telepathy, suggesion, hypnosis;
- non-intrusive sensors and actuators: headsets, goggles, contact lenses, mobile prostheses;
- intrusive sensors and actuators: implants and electrodes connecte to the brain and the neural system in general.

2. The communication direction: from outside to the brain( perception) and from brain to outside (action).

4. Conscious and willful engagement
- no perceptible engagement; ideally the prosthesis, as any organ, lets itself be forgetted when it works correctly (liver as well as glasses);
- no engagement, but bad situations where the subject is controlled without knowing it, or triggers external actions without willing them;
- the neural system and the mind globally must be adapted to an environment which does not transits via the traditional sensori-motor channels; hence, for instance, the demand for haptics, the noise accepted tof computer keyboards, etc.; if we go quite far, we enter a "terra incognita" of relations with the world, and cannot find any help in historical precedents.


5. The part of digital art in these experiences
- Most of these experiences are presently games or medical cures (ans probably also military);
- some artists make experiences in this domain, but not yet convincing; see our dialog with Kiel Long, following a symposium at Brussels 'Imal de Bruxelles. 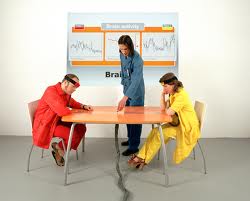 Brainball: a game for two. The most relaxed wins!

- Direct neuronal interfaces, according to Wikipedia.
> A 2017 paper in Makery about the Encephalophone
> In 2010, Wu Juehui and Shao Ding founded the art group “MeatMedia”, focusing on the “Emotional Interface” in an attempt to find a balance between the“Dry media”and the“Wet media”. Their common work, Brainstation (2009).
< Une puce dans la tête, by Dorian Neerdael. FYP 2014. Historical references and philosophy.
- Brain-to-brain connection between two rats. See press release" by Duke University, Pr. Nicolelis, 2/2013.
- Activity of a brain at the cellular level. Le Monde 2013c.
- Mind controlled robotic arm, according to Reuters, 12/2012.
- From dreams to robots (Soonsoon 2012)
- An article in Nature (May 2012) gives to think that progresses are achieved, but still in the range or limited experiences.
- About brain and immersion, multiple notes in [Rose, 2011].
- The 1000th day of operation for an implantation of Brain Gate at Brown University (Rhode Island) on a paralyzed woman (2011).
< Brain-computer interfaces for communication and control. by Dennis J. McFarland et Jonathan R. Wolpaw. Communications of the ACM, May 2011. No breakthrough, but a state of the art and a bibliography.
- Projects (2011) by Slawomir Nasuto, project leader at University of Reading
- Experiences by Nina Sobell. See Video. (2008) Not really conclusive.
- Openvibe. Inria open sofware for direct brain-to-computer communication. Active in 2014. 29 pages in Machiko Kusahara, in [Grau, 2007].
- Mobie.In Japanese. Movie brain interactive editor. Interesting from a theoretical standpoint. Still limited due to the sensor's limitations.
- Experiences of non retinal vision, by Helder Bértolo (2005)
- Brainball, a game by Interactive Institute Smart Studio. A paper about it among others.