Background. A basic function for any graphic software, and even a word processor. See [Gonzalez], [Flash], [Photoshop]...

Balance. Tools to get the best equilibrium of shapes, colors, sound tracks...

Band pass.
- For textures, see [Ebert].
- The higher it is, the more beautiful are the results.

Example of a banner, for a web news magazine. 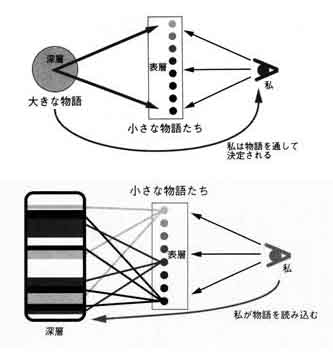 The data base model of Generation Otaku, by Hiroki Azuma ( 2001).

Behavioral (art) , behaviour, behavior.
- Behavioral art: an art giving life to entities (agents, beings, robots, NPC...) with behaviors showing some level of autonomy. The issue of "absolutely autonomous" beings is a metaphysical problem that we shall not deal with here. [Aziosmanoff], in his book Living art (CNRS Editions 2010) makes a lot to define behavioral art (or work of art), even defining a "behavior 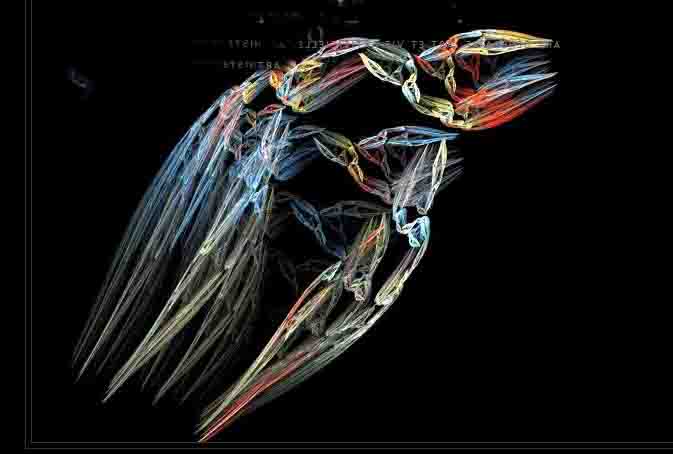 Image of a being, by Alain Lioret.

Being. See our special notice. 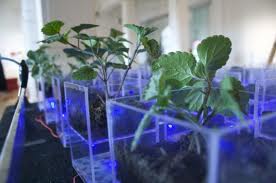 Biological art (here a work by Honf) is not necessarily digital, though computers are at work to drive the processes. But this form of art is one of the ways which converge towards "machinic life", synthesis of biology and computer techniques, and is the natural skyline of generative art

Bimedia. Joint use of paper and Internet. "Several local editions of the Parisien are experimenting the bimedia" (Le Monde du 5/10/2011).

Biography. There is nearly no bibliography in diccan. For two reasons :
- Wikipedia, art press and/or the artists websites are in general well documented on this topic. And we give links to them.
- It's more difficult and useful to comment the works. We translate here Paul Valéry (Introduction à la méthode de Léonard de Vinci): "... the author, fortunately, is never the man. The life of the latter is not the life of the former. All critics are dominated by an outmoded principle: man is the works cause, as the criminal is the cause of crime. Actually, they are its effect more than else! But this pragmatic principle makes easier the judge's work: biography is simpler than analysis. It teaches nothing about what we mostly look for... More! The true life of a man, always ill defined, even for his neighbor, is of no use to explain his works, if not indirectly and to the cost of a very careful elaboration".
- Nevertheless, in diccan indexes, mainly for synthesis and statistical analyzes, we give the country (birth or residence according to the cases) and the decade of the first digital work by this artist.

Biorthogonal. A feature of some filters, by which they are apt to good reconstructions from sub-bands. See [Gonzalez]. 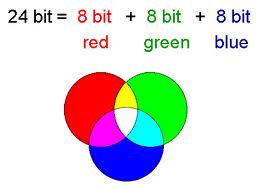 The bit depth is the number of bits used to code a color. The most frequent depth is 24, with 8 for each of the three primary colors (RGB), plus sometimes 8 for the transparency (alpha channel). The schema here is from a tutorial by University of Cambridge

Bit.
- Bit-depth: depth in bits of a pixel [Brinkmann] or of a sound sample (in this case, must me combined with the sample rate to indicate the recording quality).
- Bit plane. A coding and processing technique which limits inter-pixels redundancy. See [Gonzalez] p. 448 sq.
- More in special notice.

Bitmap. A set of pixels (possibly, voxels) representing an image as a raster of points (pixels), each one with its own color.
- Programming: [Foley], [Flash], [Photoshop].

Blending.
- There are two basic methods to blend colors: additive and subtractive. But many others can be thought of. It is an aspect of compositing.
- Programming: [Foley], [Processing], [Photoshop].

One of the first blob architectures, by Lars Spuybroek (NOX) and Kas Oosterhuis. Called The Water Pavilion (1993-1997).

Blob. Binary large object. A priori; it has no particular structure. It may be an image, for example. .
- The term was created (admittedly by Greg Lynn) to denote, in data bases, fields assigned to data much heavier than a traditional variagle. These files can be dealt with as any other fields, according to their type, of course (you cannot arithmetically multiply an image by another one). - In architecture [Picon] indicates that the term has been important aroud the eighties, but that its use is declining at the beginning of this centure. He comments " The arbitrary development of volumes could explain the dramatic waning of the blobs... in spite of their diffusion beyond the borders of digital architecture proper". (Our approximate translation of "Le degré d'arbitraire qui semble s'attacher aux volumes pourrait bien expliquer le déclin spectaculaire des blobs... malgré leur diffusion au-delà des frontière de l'architecture numérique proprement dite").

Blue Ray, or bluray, or blue-ray, popular names for the standard BD term.

Blur, blurring. These basic functiosn are very common, and the simple ones are easy to write. But they can be heavy in computation time.
- For stump, see [Brinkmann], [Gonzalez], [Java], [Processing], [Roxame]n [Photoshop]. The simplest method is to take the average of values on a region of pixels typcally 3x3 or 5x5) centered on the target pixel. The processing time grows rapidly when the region size is increased. - Median blur. Instead of the average, you sort the values of the pixels in the region, and choose the median one (for instance, the 4th high one on a matrix of 9). The result looks frequently cleaner that the average blur. But the computation times grows even more rapidly with the matrix size. - Random blur. It is not exactly a "blur", but gives pleasant results. Principle: replace the color of the target pixel by the color of a pixel chosen at random, in a region around the target pixel, as above. Here, the computation time does not grow when the zone is enlarged. You can find source (very easy) in [Roxame]. - On images [Bres] tells about movement blur.
- On regions, the blur issues are presented by Ken Perlin in [Ebert] pp. 337 sq.
- Fuzzy sets and fuzzy logic are not, as far as we know, used in digital arts.

Bold, boldness.
- (Text). The thickness of lines forming a letter is higher than on the standard font.
- (Image). A line may be more or less thick. Thickness is more appropriate here than boldness. 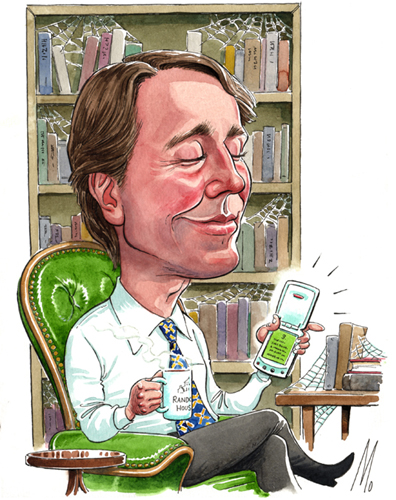 The book reader of tomorrow, seen by Maurice Mechan


Breeder, breeding. Developing a population, focusing mainly on individual beings and their reproduction.
- In artificial life software, opposed to biotopes by [Whitelaw].
- In bio-art, breeding and gardening are traditional forms of art.
- See [Berger-Lioret]. 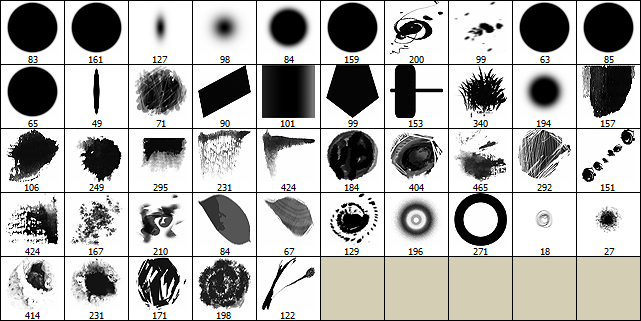 Brushes are shapes who afford to generate sophisticated drawings from the mouse, graphic tablet or a procedural program..

Bubble.
- On comic strips, also called balloons. Wikipedia. Their automatic placement could be programmed.
- In show halls, bubble machines or blowers may be taken as an effort for digital systems.

Bump-mapping. Algorithms to modify the surfaces normal vectors in order to simulate holes or bumps. See [Foley] . [Ebert] shows how to do this kind of computation.

Bundle Adjustment. Wikipedia: Given a set of images depicting a number of 3D points from different viewpoints, bundle adjustment can be defined as the problem of simultaneously refining the 3D coordinates describing the scene geometry as well as the parameters of the relative motion and the optical characteristics of the camera(s) employed to acquire the images, according to an optimality criterion involving the corresponding image projections of all

BYOA. Bring Your Own Animation. One of the Paris ACM Siggraph activities.