Whatever their names and aspect, digital musical instruments have in common the replacement of the acoustic (mechanical) sound generator (string, pipe, membrane) by an elctronic oscillator (or set of oscillators) combined with filters. 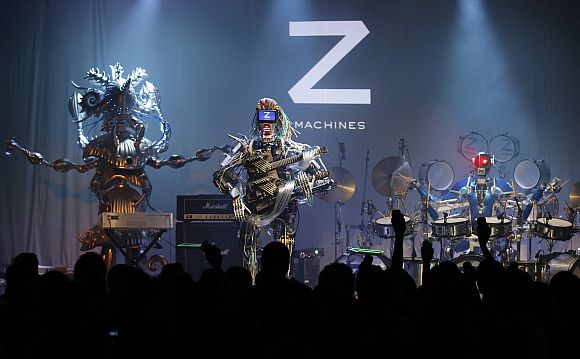 Z-Machines, by Kawaguchi. A gang of robot musicians.

(There are a few exceptions, due more to psychologialc effect, like drums hammers driven by motors or the full orchestra Z-Machines, playing music by Tom Jenkinson's music on instruments designed by Yoichiro Kawaguchi. See our post (2013). It may considered a hoax more than a real breakthrough in digital music, but also as a sort of answer to the issues we raise below.

This has a several important effects: on the output, on the input, on the intermediary coding, on the sound quality.

First, it is a typical domain of digital fragmentation. The traditional instrument associated strongly the sound generator properly (e.g. the string), the control device (the bow) and the artist specific education and (hard) training, in an complete system that could play witout any other devices.

Now, the generator is a specific software (any computer can do), and takes place in the middle of a chain that
- 1. starts generally with the musician hands on a keyboard but also through many different interfaces;
- 2. is translated in abstract signals (midi code), not only of the melody he plays, but also of his actions on a lot of control switches and buttons; this allows both complexity, versatility and autonomy;
- 3. is generated (waves), filtered and mixed (possibly integrated into multimedia); this the code to raster transition (see form )
- 4. is finally delivered to an audible level through contraptions that go from a simple loudspeaker (possibly just a headset) to powerful and complex systems directed from a control room to adapt it to the room, auditorium, stadium, radio or TV channel or any combination over the Internet.

1. Interface for the player

Music is doubly digital from start:
- On the one hand, musical sounds organize themselves naturally according to mathematical ratios (octave notably). Acoustic bodies generate harmonics, even when animated by a continuous signal like breath.
- On the other hand, the human fingers (digitus) have played an important role from start, be it for wind instruments (holes in the pipes) or string instruments (with or wihout bow). Keyboards appear on organs during the Roman empire.

Let's limit us here to the interfaces for digital instruments.

Keyboard. You can use the standard keyboard of a computer to compose with a sequencer, or to do live coding. But musicians use mainly keyboards inspired by the organ or piano, with its classical alternance of white and black keys. There are a large number of variants, from minimalist ones (possibly very cheap) to large keyboards or sets of keyboards. They are of course completed by more or less control switches and buttons. Sometimes with pedals.

As an extreme example, electronics can be used in revised versions of ancient instruments, with possible separation of the keyboard from the instrument itself. This is for instance the caes of the organ's pulpit of Saint Eustache in Paris.

Variant with the fingers: Reactable, Yamaha Tenori-On. A matrix of LED's. You "place" sounds

Mouth being more "instinctive", a lot of efforts have been devoted to electronic instruments imitating the shape and operating mode of wind instruments. In the mid 1970's emerged, and in the 1990's appeard on the market the (Electronic wind instrument. Wikipedia.). Their success remain limited, as well as the real novelty of the woks, in spite of efforts by artists like Michael Brekcker (note that this Wikipedia page makes no mention of the Ewi).

Creativity is still living, since a trumpeter like Ben Neill designed the "Mutantrumpet" which he uses as an entry point not only to music but to the whole gamut of VJing. See also the technopipes, inspired by the Scottish bagpipes. 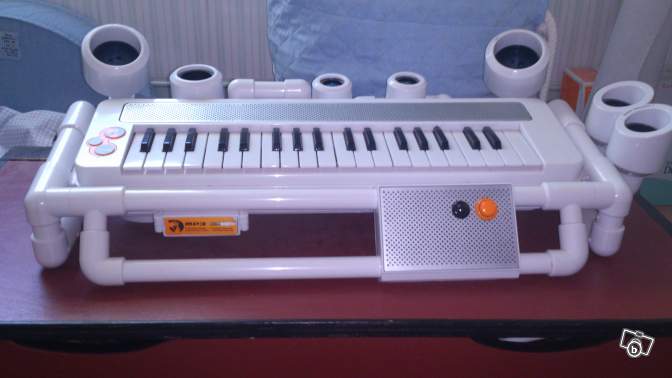 An example of innovative effort in interfaces for music, the Tunes n'Mix by Lansay (image from Le Bon Coin website).

See some other experiments: at Elektra in Montréal (report by Dominique Moulon), or the Digital Washboard, a sound instrument with visual feedback, and capture of the visitorsmoves. Vidéos :http://youtu.be/jGJh63sV66A. The context of this creation: http://www.avatarts.fr. See Derrick Giscloux.

Some experiments have been done with direct brain control. Not yet convincing; see our dialog with Kiel Long, following a symposium at Brussels 'Imal in 2011. 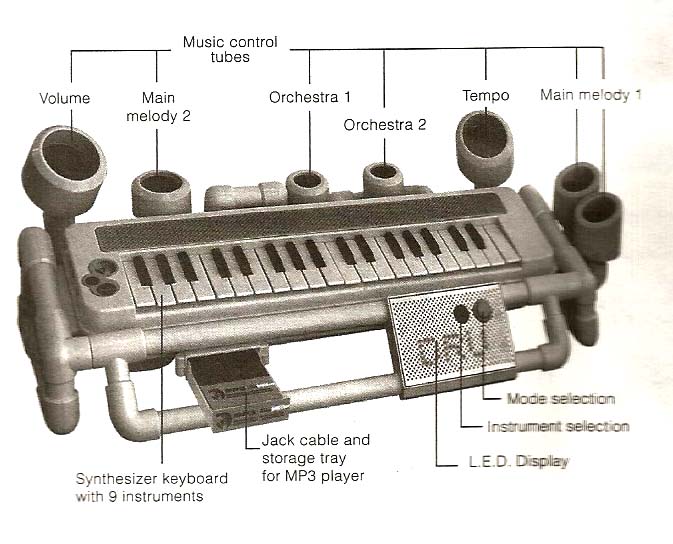 Lansay: a lot of interesting ideas!

See code in our form/matter notice.
Behind the interfaces operates the code. With two consequences
- it may be difficult to be read by humans
- it opens the way to autonomy. Let's comment this point.

Many instruments have been able to play without player since at least the 18th century: music box, beatbox, mechanical piano, public chime, and sometimes a full orchestra. Two ways are open to go further. Both are mainly software, with sometimes hardware implementation (more for the show than for real creation):
. autonomous generation of new melodies (automated composition, generative art),
. automated "accompanists"; this demands that the instrument is able to "hear" the other ones, to perceive at least the tempos and rhythms, and possibly the tonalities and even the themes. Patter recognition techniques will then allow to build the accompanist's play.

Beatboxes opened the way, because they are comparatively simple, and also because a human drum player needs heavy, large and costly instruments. Full orchestras are shown today, with robots on stage, like Kawaguchi Z-Machines (see above) or the virtual orchestra Capture, by Grégory Chatonsky and others.

We are here at the acoustic level. The player and the coding system provide a succession of notes to be played, and corresponding sounds (vibrations) must be generated.

On the first synthesizers, that was done by electronic, hardware, devices. Now, the sinusoidal forms of sounds and their combinations are directly created by software, and transformed in real sound only at the final phase.

That opens the way to create new "instruments", taken as new sounds. A recent example: the Californian company Audio Impressions, founded by Chris Stone (a composer) proposes "virtual strings", which allow a rendering both realistic and musical (Three pages in French by Pierre Estève in KR Home-Studio, April 2011).

Highly technical, on stage or external. Sophisticated hardware and software allows a modeling of the concert hall and stadium, and the deployment of powerful hardware to provide in each place both the trebles and the ultrabasses.

5. The pros and cons of digital instruments

1. You can regret the intuitive, instinctive and immediate union of the player with its traditional instruments, notably the winds. But, in fact, as soon as music goes beyond the spontaneous animal call or scream, music includes a structured semiotics. And any instrument requires education and training.

2. The separation of levels let the designer, player and composer adjust each level for itself, indepenently of the others.
For instance, with brass instruments, basses are necessarily big and heavy, trebels small and delicate. With electronics, the same keyboard goes for all pitches and timbres.
On the other hand, control devices may evolve towards complexity as well as easiness, conform to natural movements of the human body. That can be used as well to offer easy interfaces to children as to design highly sophisticated ones for professionals, with brand now spacds of expression.

3. The generalization of the keyboard as an universal control devices lets little to body expression on stage.

4. In acoustic music, live or recorded, part of the listener's pleasure comes from the recognition of the different instruments and voices. This pleasure is lost when the sound is generated electronically.

5. The specific quality of acoustic instruments has for long superior to their electronic imitations. In the 21th century, that is less andless the case.