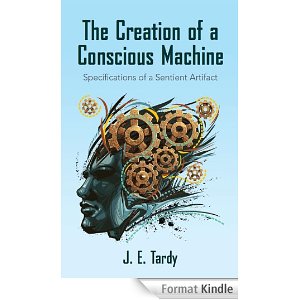 Tardy, one of the most recent authors about this issue According to Amazon "Jean E. Tardy is a technology expert. His interest in Artificial Intelligence dates back many years. He was among the first to identify natural selection as a valuable AI technique. Jean Tardy published a modern apology of the Christian Doctrine. He is currently developing the blueprint of a conscious machine.

This vast issue lies perhaps beyond the limits of art criticism, and more so for digital art. But of matters for some digital artists (for example Alain Bittler), who set conscience as the plinth of any artistic creation. It matters also for many people who wonder if and where will stop the progress of computer intelligence. So let's try to draw some lines.

1. Spiritualists non-reductionists. For them conscience, and the human mind in general, cannot and will never be reduced to a machine or to a formal description. They are generally spiritualists and dualists (there are real beings independently of matter). They are frequently believers.

2. Reductionists (or "materialists", somehow), who think that conscience has biological bases in brain structures and life in general. They note that conscience is not a human exclusivity, but belongs also to animals, at least the superior ones. They see favorably the developments of artificial intelligence, and tend to believe that someday wil come with computers more intelligent (then conscious) than humans (transhumanists).

3. Experimental and factual minds, who do not settle the issue, but find that this research topic is fertile, fascinating, and motivating for some forms of artistic creation.

We tend to think that, at present at least, no machine can reasonably be thought as conscience, even though some of them give us this impression at times.

To avoid some difficulties met around this issue to develop some concepts (like intention, for example), we think that conscience can be let aside (at least temporarily) and these concepts be used (in quotation marks if necessary) as far as they can efficiently be modeled in formal systems.

In some cases, the raster/code couple that we describe in our form notice may help to work creatively without dissipating the fascination and mystery, notably about continuity and infinity.