1D.
If a purely binary art existed, it would operate on a simple binary string, of unlimited length. This would be its most natural medium. It is the case of DNA (even if bits are represented by pairs).
But our sensorial nature does not work this way. We see and think in 3D, plus the time. Probably this kind of space is a soft of optimum, functional and aesthetic. Even the DNA feels the need, if we can say so, to fold itself in 3D.

2D. This is mainly the image space. Though you could consider music as two dimensional, with the pitch and time matrix (if we limit ourselves to the melodic aspect).
- 2D is comparatively austere, as opposed to 3D, for instance. But as always, limitations open new forms of liberty.

- Paris ACM Siggraph publishes under wiki format a story of 3D in France. The complete version of the "Early days in France" symposium, organized by Paris ACM SIGGRAPH and EnsadLab within FMX about the story of French 3D is avalaible on line: http://paris.siggraph.org/media/fmx/. It offers four hours of testimonies and sories by t.he main pioneers, with the most important vintage films.

The 3D term has two meanings:
- stereoscopy properly, with two images and the need to use special goggles or screens,
- a design monde in physically 2D images, which then can be seen or printed by the classical means.

From an aesthetic standpoint, 3D indeed opens to artists new and promising spaces. Some convincing examples can be seen in the Avatar film. But, as every time with this type of innovation, the first years let an impression of coarseness. In a presentation, at Paris ACM Siggraph of La H ut, the final rendering of the film, highly saturated and contoured, contrasted with the delicate paintings, made by traditional ways as a preparatino. Let's recall that similar phenomena were observed in the 1950's, when color post cards or TV sets got to color. There are two combining factors:
- on the one hand, the new technologies have not reached their maturity,
- on the other hand, profitability demands to think first "mainstream".
Art comes back in the subsequent years, with technologies more mature and less costlty, affording artists to work for less grassroots audiences.

- See the gallery of Jean-Yves Gresser (and, more generally, the Stereo-Club website) about stereoscopy.
- The Que Choisir (A consumer testing magazine, Dec. 2010) about 3D at home "Relief is convincingly rendered, but visual fatigue, and sometime headaches spoil the feast". The magazine's website.
- "3D Full-HD projectors are present in shops. For the moment, at prices from Euros 4 000 euros, these models are indeed costly, but are prefiguration of what the home cinema will be tomorrow." An 8 pages series in Ere Numérique, May-June 2011 (of which 2 pages about glasses).

- A state of the arts of character 3D animation: the "Body Motion Control", chapter, by Roman Boulic and Paolo Baerlocher, in [Magnenat]
- 3D printers can be found in open source, notably Reprap of University of Bath/
- Pleasant examples of 3D printing, indicated by Stéphane Maguet, on the blog i.materialize 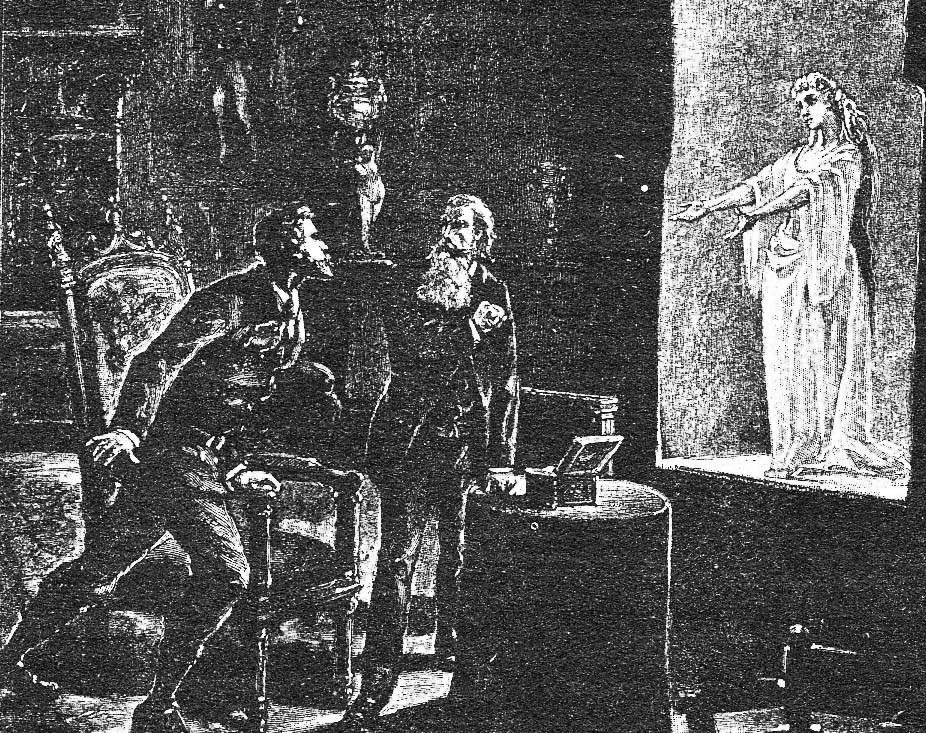 Jules Verne had foreseen the 3D.

Jules Verne had foreseen the 3D in Le Château des Carpathes. His text lets no doubt about the realism of the image: "Franz was near to throw himself on the stage to take her into his arms... ".

Among the origins of 3D we must quote: perspective, photogrammetry and metrophotography. (The latter two had technical and not artistic aims).

3ds Max. A 3D creation software.
< 3dsMax Bible. by Kelly L. Murdoch. A reference book. it seems to be republished every year since 2008, by Wiley).
- Comparison with Polypro ad Sketchup online. Briefly: Polypro is a little less efficient, and Sketchup is free.
- Quoted by [Berger-Lioret].

3DTV. A provider of google-less 3D;

3DVF. A French speaking site dedicated to 3D. Organized every year a competition for infographists.